Hands-on: Wild Rift is the perfect League of Legends experience on mobile

Could this become the top mobile MOBA? 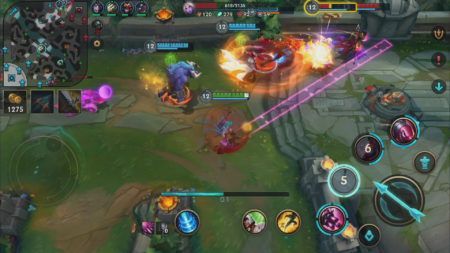 It’s been a long time coming, but the League of Legends experience will finally be playable on your phone next year.

Interestingly, it’s not the same game, but one built from the ground up to deliver the LoL experience to gamers on the go. ONE Esports managed to spend some time trying out the beta build, and here’s what we found out about the 5v5 MOBA.

Like most mobile MOBAs, Wild Rift features a joystick control for movement, but also uses a pseudo joystick for skill placements. While you can simply let the game’s auto-targeting place the spells for you, players can also hold down a skill and move the cursor around to better aim their spells.

It’s pretty intuitive, and adds a bit more depth for players who want to get better in the game. The controls are also easy to get used to, and I found myself easily dodging enemy attacks and casting my spells accurately once I got used to it.

Wild Rift features intense action, and makes this happen by making the games short — Riot says each game lasts from 15 to 18 minutes. You can gain gold by killing minions, and you don’t need to last hit to actually get gold. This also means you’ll be able to gear up quickly.

Each hero also has four skills to pick from, and can lead to a variety of different builds compared with most mobile MOBAs that just have three skills. Putting wards is also as simple as walking to a ward spot to put them (though there’s a cooldown associated).

The only thing that’s holding back the action though, is that you’ll need to go back to the base to buy gear, and while Riot says that Teleport is included, I couldn’t find it. That means you’ll have to run back to the lane after using Recall.

There’s a lot of Champions in LoL, about 147, including the newly announced Senna, but only 40 Champions, such as Garen and Soraka will appear in Wild Rift at launch. That’s because Riot needs to tweak the heroes to better fit the mobile gameplay, while still keeping to the essence of the heroes.

It’s also worth noting that there’s no crossover between the PC and mobile versions of LoL, so you’ll need to unlock any heroes and skins you already own on the PC version all over again.

The good news though, is that Riot has plans to add more heroes to the game maybe even before the launch and may even include exclusive heroes not found on the PC version.

The game is currently not available — and will only launch in 2020 — but you can pre-register on the Google Play Store now. There will also be in-game bonuses for those who sign up when the game officially launches.

READ MORE: Riot is making an animated series based on League of Legends