Despite huge nerfs, TheShy is proving Goredrinker can still work 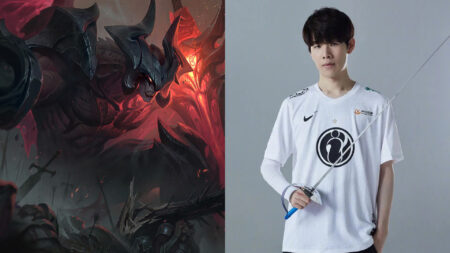 Champions that took over preseason with Goredrinker, Ravenous Hydra, and Sterak’s Gage, such as Renekton, top lane Rengar, and Camille have fallen from S-tier globally in the solo queue ladder. Aatrox too, took a hit, possessing a 49.68% win rate according to U.GG at the time of writing

In this mid game exchange, TheShy had three completed items: Goredrinker, Sterak’s Gage, and Lucidity Boots. Pushing bot lane alone, he put himself up 50 CS against his opposing top laner. Once BLG engaged onto IG at mid lane, TheShy channeled Teleport onto the Vision Ward in the river brush.

Finding himself on the opposite side of his team, TheShy’s Aatrox was smack in the middle of four enemy bodies.

And so, in typical TheShy fashion, he turned on World Ender and went all in.

After landing two Qs, TheShy’s Aatrox was crowd controlled by BLG and brought down to one quarter HP. Thanks to Sterak’s Gage’s lifeline, a massive shield popped, saving him from death. Subsequent lifesteal from his items and the increased healing from Aatrox’s ultimate brought him back to almost full health again.

Turning the fight around for his team, IG lost two but took down four members of BLG, which gave them tempo and an extended gold lead. They went on to sweep BLG 2-0 to claim the series.

The newest patch 11.5 did not change any part of this life-giving build nor did it affect Aatrox, so you can bet that it’s still very strong. Even though Aatrox has a sub-50% win rate in the solo queue, TheShy proves you need a certain level of mastery on this mechanically intensive champion to excel despite the nerfs. One of his trademark champions, who can forget the highlight reel moment when TheShy’s Aatrox dunked G2 Esports in the Worlds 2018 semifinal on route to the Championship?

If there’s one champion that is still viable even after Goredrinker and Sterak’s Gage nerfs, it’s Aatrox, and to some extent, Olaf, whose innate healing compounds the effects of these items.