After carrying IG this weekend, does Puff deserve more playtime? 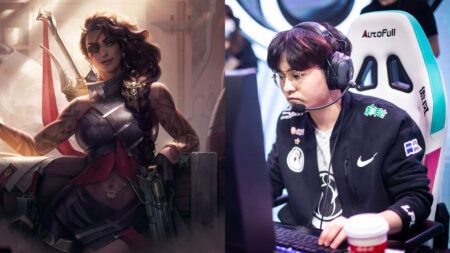 Within the first five weeks of the League of Legends Pro League (LPL) Spring split 2021, Edward Gaming were 7-0. Sitting at the top of the table with a perfect streak, they were the only undefeated team so far.

The day before their match against Edward Gaming, 8th place Invictus Gaming made a surprise announcement; their starting lineup for game one will be substitute bot laner Ding “Puff” Wang paired with rookie support Li “Lucas” Tan-Pan-Ao.

At best, Puff in 2020 was a conservative AD carry. At other times, inconsistencies plagued IG’s bot lane, with some highs and more lows when he lost out 2v2 in lane. Often, it fell onto the shoulders of mid laner Song “Rookie” Eui-jin to hard carry IG to victory.

Ever since IG acquired former Royal Never Give Up and eStar bot laner Zhang “Wink” Rui at the end of last season, he has been their starting bot laner for Spring 2021, and expectedly so as he’s a solid top ten AD carry in the league. Benched, Puff has not played a single game in Spring 2021 — until this crucial series against EDG.

In game one, IG drafted Xayah for Puff after giving over a first pick Samira to EDG. Bot’s laning phase focused on farming while jungler Peng “XUN” Li-Xun on Lillia determined the tempo of the game. During team fights, Puff swiftly chained combos with his teammates, and did his job from the backline in the 30-minute victory with a 6/1/5 KDA.

On red side again in game two, IG picked up Rell and Samira for the ultimate bot lane combo. In a bold move, they even last picked Ornn for Kang “TheShy” Seung-lok, who doesn’t usually play this tank.

At the six-minute mark, IG attempted to dive EDG’s bot lane, but quickly botched it, and gave over five kills to one. Holding a 2,000 gold lead, Viper profited the most, racking up two kills and a 150 gold bounty on Ezreal.

History repeated itself in the mid game, where IG unfavorably gave up four kills to one, 17 minutes in. Lucas on Rell went in too deep, and got picked off first before the rest of EDG collapsed on his teammates. This put EDG up by 4,000 gold.

After picking off XUN’s Olaf, EDG started Baron with a numbers advantage. The moment TheShy channeled Teleport, EDG turned their attention onto IG. Once Emperor’s Divide was burnt, Flandre’s Renekton made a beeline for Rookie’s Azir and burst him down. Even though he traded one-for-one, it was still worth it as he left IG with only three members remaining.

In dire straits, Lucas’ Rell jumped into EDG’s backline to create space for Puff’s Samira. Flashing in with Wild Rush at 75% HP, Puff made one of the most aggressive moves of his career.

Dead in the center of three EDG members, he activated a max “S” stacked Inferno Trigger ultimate to finish off Lee “Scout” Ye-chan. At 10% HP, he committed onto Viper’s Ezreal with Wild Rush before finishing off Tian “Meiko” Ye’s Alistar for a clutch quadra kill.

Dwindling in numbers without a jungler, Puff turned a losing fight into a game-changing one. Closing the gold gap, IG went on to win a second fight around Baron where Puff nailed a triple kill.

Finally, 40 minutes in with three elemental dragons each, IG pushed into EDG’s base with a very tanky Ornn, a late-game Azir, and fed Samira. For his risky and rewarding Samira moves against the strongest team in the league, Puff received his first MVP of the season.

Riding on his victorious momentum, Puff continued to start in IG’s second match last week against Suning. Unfortunately due to a combination of drafting and execution issues, IG were swept 2-0.

Possessing three AD carries on their roster, IG hasn’t even debuted Wu “Snow” Hao-Shun, who won the LDL Summer championship alongside Lucas last season. Even though Puff put on a spectacular performance against EDG and has clearly improved since last year, he hasn’t played enough stage games to prove that he deserves a starting spot on the roster. Furthermore, IG has consistently defeated EDG in the regular season of LPL since Summer 2017, somehow always managing to outclass them stylistically.

So far, Wink has been their most consistent bet at bot, holding a top five position among the league’s AD carries in terms of KDA, kill participation and average gold difference at ten minutes.

Most of IG’s troubles lie in their inconsistent draft priority, which leads to poor in-game execution of drafts that do not gel well with their aggressive playstyle. Holding a 5-5 record, the team will need to get their act together soon if they want to finish top 10 and qualify for the Spring playoffs.

READ MORE: A closer look at how Yagao carried JD Gaming in this Worlds quarterfinal rematch