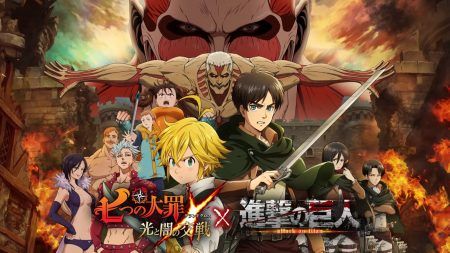 Players of the game will be able to see some of their favorite characters like Diane, Meliodas and Zeldris, transported into the northern forest of the Kingdom of Liones.

As shown in the trailer, they are joined by notable members of the Survey Corps such as Levi Ackerman, Mikasa Ackerman, and protagonist Eren Jaeger in his Titan form.

The turn-based RPG game has launched a time-limited story filled with numerous quests and boss raids. Levi, Mikasa, and Titan Eren are playable characters during the event, and can even be permanently unlocked as SSR characters through the pick-up gacha.

Players will also be able to acquire the SR Cadet Corps Eren character through the special login bonus campaign.

The Attack on Titan x The Seven Deadly Sins: Grand Cross of Light and Darkness event is now live and will last until July 16.