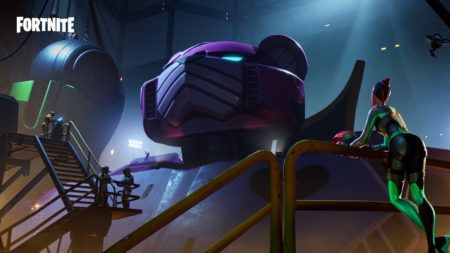 Epic Games decided to end Season 9 on a high note with a live event dubbed, “The Final Showdown”. The spectacle featured the giant robot from Pressure Plant going head to head against the monster from Polar Peak.

Fortnite YouTuber Enzait shared a cinematic version of the two giants battling it out around Loot Lake.

At around 2 a.m. (GMT+8) today, the one-eyed monster from Polar Peak, Cattus, rose from the water right above Lazy Lagoon, and then walked towards Loot Lake in search of something.

At the same time, the giant robot at Pressure Plant named Doggus was activated and fired rockets at the distracted monster. (If Doggus looks familiar, that’s because it’s the Mecha Team Leader skin blown up to Brobdingnagian proportions.)

Cattus retaliated, firing a green laser that knocked Doggus down. But the robot got back up and tackled the monster right over Snobby Shores, where both giants fell into the water.

Doggus seemed to victoriously emerge when, out of nowhere, the one-eyed monster leapt from the water and ripped off one of the Robot’s arms.

On the verge of defeat, the robot punched Cattus into Loot Lake and picked up a large orb, which allowed it to power up. It then picked up a giant sword from Neo Tilted and used it to kill the monster.

In typical Fortnite fashion, Doggus the robot did a celebratory floss to put an exclamation mark on its victory.