Boom ID and Royal Never Give Up beat favorites Gambit and Ninjas in Pajamas for an epic first day. 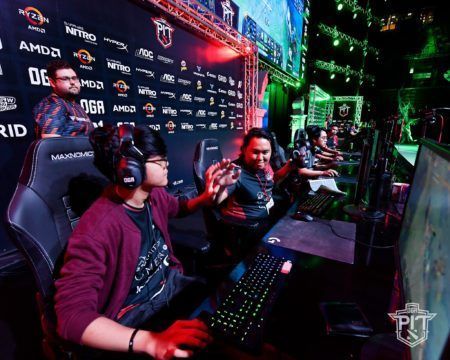 There has been upset after upset.

Following an incredible week of Dota 2 from ESL Mumbai, the pros have now set their sights on the Dota PIT Minor, especially the teams that decided to withdraw from ESL Mumbai.

Indonesian team Boom ID upset the previous Minor’s runner-up CIS team Gambit beating them 2-1. While Boom ID played well, it was Gambit’s run-of-the-mill performance, especially during the third match, that lost them the game as they had no answer against Boom ID’s Ursa and Outworld Destroyer combo.

On the other side of the group stage, Ninja in Pyjamas versus Royal Never Give Up featured an amazing back and forth first game with NiP and RNG trading blows for 62 minutes.

With a 17,000-gold lead, RNG had hoped to put an end to game one but NiP defended their base with Martin “Saksa” Sazdov’s MVP performance to push RNG back, turning the tide of the game. RNG decided to take a different approach for the next two games, taking their time to let NiP make mistakes before winning 2-1.

With the addition of veterans Lou “Ferrari_430” Feichi and Zhang “Xiao 8” Ning, EHOME had hoped for immediate success but Alliance had other plans as they dominated the Chinese squad in the first game.

EHOME did better in the next game, with the majority of the match being even. However, the Chinese team decided to bet it all on one massive team fight outside their base after Alliance mega-creeped them, which cost them the game and the series.

Meanwhile, Majestic was dominant, running right through Forward Gaming in the first game, but FG’s AOE heavy strategy paid off to tie things up. The third game was relatively even, but the South American team broke through FG’s midlane before finally winning the series 2-1.

The second day of the group stages will feature matches with NiP vs Gambit and RNG vs BOOM in Group A; then Alliance vs FWD and EHOME vs Majestic. You can watch the streams here.