MDL Disneyland Paris Major catch up: OG vs EG the one to watch 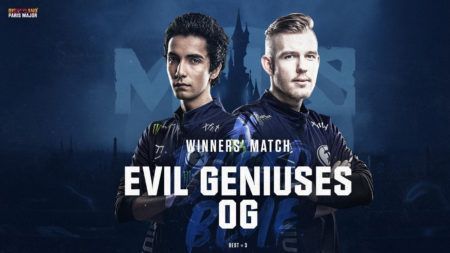 It’s been eight months since Evil Geniuses went up against OG in a gripping upper bracket match at The International 8.

But fans got the rematch, as the MDL Disneyland Paris Major brought us an impressive faceoff between the teams.

Right at the start, the OG squad caught out former team captain Tal “Fly” Aizik and began tipping him after scoring first blood.

With OG employing its trademark unorthodox playstyle, the side had mid-laner Topias “Topson” Taavitsainen chose a risky Pangolier hero pick, paired with Jesse “Jerax” Vainikka’s Tuskar. This partnership had its moments but, for the most part, were altogether too sloppy. Evil Geniuses, on the other hand, played consistently, utilizing their Silencer ultimate in crucial team fights.

The next match continued OG’s careless play, which cost them heroes and map control. EG was dominant for the majority of the match and, at the 38-minute mark, won a convincing team fight that eventually sealed the game.

EG entered the matches in top form, while OG stayed true to its identity, thinking outside of the box with plans to catch teams off guard. However, OG’s strategy ultimately failed to produce results during the rematch, with the North American team taking out its European rivals 2-0.

The first day of the group stages also featured other suspenseful, high-level action, especially Team Liquid’s matches against Keen Gaming and Virtus Pro, which you can watch below.

The MDL Disneyland Paris Major continues tomorrow and can be viewed here.