Are pubs ready for support Tinker? 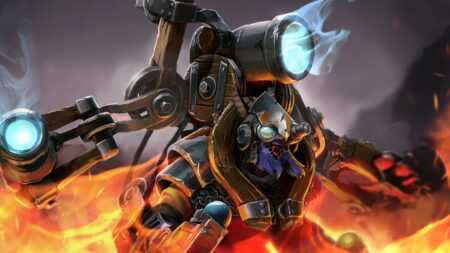 Dota 2’s latest patch 7.30 has hit the live servers, and it has turned the meta upside down.

Several neutral items have been removed, while new ones have been added. There were also three major item reworks, and several shards that were completely revamped. There is clearly a lot to unpack in Dota 2 patch 7.30.

One of the most interesting changes in Dota 2 is the ability of heroes to swap roles as the game updates. Heroes who were traditionally carries can suddenly become supports, while long-time healers turn carries can lead their team to victory.

Tinker is one of those heroes that is currently transitioning from midlane to support. This article will guide players into how to best utilize him as a support.

The removal of March of the Machines

Tinker received multiple changes to his kit, including an entirely new ability in patch 7.30. The two biggest factors that make him a good Dota 2 support are the removal of March of the Machines as a basic spell, and the addition of Keen Conveyance.

March of the Machines was Tinker’s best farming ability that allowed him to quickly clear creeps all over the map.

Previously, Tinker players would max out March of the Machines, rush a Boots of Travel, then push out every lane. This allowed him to scale well into the late game and overwhelm their enemies.

Tinker has now lost a lot of his flash farming ability, which most core heroes need in order to scale into the late game. While the hero can still get March of the Machines at the 20-minute mark with Aghanim Shard, it’s not the best in terms of timing.

The addition of Keen Conveyance

The second change that pushes Tinker into the support role is the addition of Keen Conveyance. This ability allows him to teleport to ally buildings, units, and heroes at levels one, two, and three respectively.

Tinker can now skip Boots of Travel and join fights globally at level six. This allows the hero to be active around the map to support his allies.

With the two changes, Tinker is now well suited to fit into the support role in patch 7.30. But how do you build him as support?

The first step to figuring out how to play a Dota 2 hero is to take the appropriate skills to suit their role. For support Tinker, the new skill build has been set.

Maxing out Laser first provides the most value early game. This ability has a 4.5 seconds blind, can hit multiple enemies, and does 320 pure damage. Use Laser in the laning stage to deny enemy last hits and denies.

In between, put points into Heat-Seeking Missile. This provides more damage for Tinker in the game. Being able to teleport into a team fight and use a 350 damage nuke that hits two heroes every three seconds is very powerful.

Defense Matrix is usually skipped in the early game. The shield can only take 320 damage at max level, which isn’t impressive. The more useful part of the ability is its 50% status resistance, which can be used to protect cores from disables.

And of course, max out Rearm as soon as possible.

At the moment, there are multiple item builds Dota 2 players can go for in patch 7.30. Generally, Tinker players will opt for a combination of the items listed below.

Tranquil Boots: These boots provide movement speed and HP regeneration, both of which are crucial for support Tinker.

Soul Ring: Soul Ring works perfectly with Tranquil boots. Together, the two items allow Tinker to use his spells frequently without worrying about going back to base to heal up.

Magic Wand: An item that has one of the highest values in Dota 2 patch 7.30, Magic Wand is useful in team fights for emergency heal as well as mana. Using Soul Ring during team fights can backfire, so get a Magic Wand for insurance.

Glimmer Cape: Because Rearm allows Tinker to refresh item cooldowns, he is one of the best users of Glimmer Cape. Tinker can keep himself glimmered up at all times during team fights, as well as stay safe.

Blink Dagger: While this item is costly to farm up for, it’s still the best mobility item in the game. Tinker players should aim to get Blink against enemies with high catch potential. It’s not a core item for every game, but it’s always useful to have.

Aghanim’s Scepter: This is the best item to increase Tinker’s damage. Aghanim’s Scepter upgrades Laser into Shrink Ray, which deals bonus 10% damage based on the enemy’s current health. It also bounces off to the farthest enemy hero in range, and provides an extra 300 cast range on Shrink Ray.

For 4,200 gold, Laser can hit two enemies, reduce their HP by 10% of their current value, and keep Tinker safe. No other item provides as much value as Aghanim’s Scepter in Dota 2 patch 7.30.

Scythe of Vyse: Whether as a support or as a core, Tinker is still the best user of Scythe of Vyse in Dota 2. Tinker can permanently disable a hero and bring them down along with lasers, or with the help of allies.

For supports, this will be too expensive to buy most games. However, if the game goes on for long enough, then this is the ideal item to purchase to secure victory.

There’s one more aspect to building a hero, and that’s taking the right talents.

In Dota 2 Patch 7.30, Tinker had four of his talents replaced. With a new role to fulfill and four new talents, players now have a lot of flexibility to work with. Some talents are more situational than others, though, so take note.

While the mana loss reduction is useful, Tinker can live without it. Soul Ring is enough to sustain the hero’s mana pool. As the most mobile hero in the game, he can quickly go back to the fountain to regen and rejoin fights.

The additional two second blind duration is very strong. Being able to completely remove an enemy’s auto-attacks for 6.5 seconds is useful at all stages of the game.

As such, always opt for the extra blind duration.

An extra Heat-Seeking Missile sounds great on paper, for it allows Tinker to dish out 1050 magic damage per use of the spell.

However, it’s rare to have three viable targets to use Heat-Seeking Missle on, and it’s too situational to take the extra missile talent in most games.

While both talents are useful, the 0.5 seconds off Keen Teleport Channel Time provides too much versatility to ignore.

Level 20 has two viable options. The extra 150 damage absorbed will help cores stay alive, which allows Tinker to play defensively and focus on using this ability to help allies.

The other option is more-offense related. All of Tinker’s damage is magic-based, so the 10% extra damage adds up quickly.

Level 20 talent choices will come down to personal preference, but it’s important to remember that it’s better to be proactive. The extra damage will help Tinker burst opposing heroes in fights, and that might win more games in Dota 2 compared to having a stronger Defense Matrix.

The level 25 talents for Tinker are the closest in terms of win rate.

Laser deals pure damage, so the extra 80 is substantial. Combined with Aghanim’s Scepter and the 250 AoE splash damage, and you have an incredibly potent spell.

The additional 0.25 seconds Ministun on Heat-Seeking Missile is useful. However, it’s only a quarter of a second duration more, and won’t disrupt enemies much. It’s worth taking in games against heroes that have channeling ultimates such as Enigma. Other than, the Laser Damage talent is the superior choice.

There’s more to Tinker than just following the proper builds. These tips and tricks above provide a good template for players who want to try out support Tinker in Dota 2 patch 7.30.

READ MORE: Dota 2’s Techies is so annoying that even pro teams choose to surrender