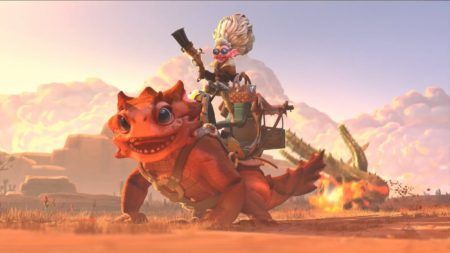 The latest hero to join the battle of the Ancients in Dota 2 is a gun-wielding, fire-breathing salamander-riding, cookie-baking grandma called Snapfire.

Valve made the announcement in the downtime after game one of the Lower Bracket match between Team Liquid and Evil Geniuses, which surprised many since new hero announcements usually happen during the last two days of The International.

From what we can gather from the announcement video, Snapfire is a member of the Keen, a race of goblin-like humanoids in Dota 2 of which the likes of Clockwerk, Timbersaw, Tinker, and Sniper are members of.

Her abilities may involve buffing allies by giving them cookies, chasing down enemies with her fire-breathing salamander mount, and using a shotgun-like firearm to shoot down opponents.

Snapfire will be coming in Fall this year, though more information about her and her abilities will probably only be revealed after TI9 concludes. She may also not be the only new hero arriving to the game, as two new heroes — Grimstroke and Mars — were announced during last year’s tournament.