Dota 2’s latest hero is Mars, the God of War

He has pretty awesome skills, too. 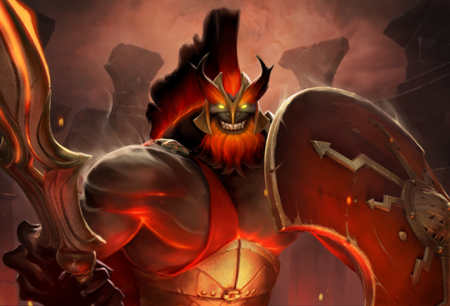 As the God of War and first son of heaven, Mars is a melee strength carry that excels in both absorbing and dishing out lots of damage thanks to his skillset.

His first skill, Spear of Mars, throws a spear that damages each enemy unit it strikes. The first enemy hero hit by the spear gets skewered and is pushed back. If a skewered hero hits a tree, building, or cliff, they will be impaled to it and stunned. This ability will be very useful for initiating fights if you are able to land the stun, giving Mars time to deal damage to a target. It can be used to take down fleeing enemies as well.

Mars’ second skill, God’s Rebuke, will most likely be his bread-and-butter and what will make him a solid carry hero. With this skill, Mars smashes enemies in front of him with his shield, knocking them back and damaging them with a critical hit based on his attack. The skill also imbues the damage dealt with True Strike — meaning it will never miss and ignores evasion — as well as adding bonus base damage when hitting heroes.

God’s Rebuke will be useful as a creep-clearing ability throughout the game. While it can deal good damage to heroes early on, it will shine when Mars gets some damage items up, as it deals a critical hit — with True Strike to boot.

While his first two skills let him dish out a lot of damage, Mars’ third skill — called Bulwark — will let him absorb a lot of it too. With this passive ability, Mars uses his massive shield to block a portion of each physical attack he receives from the front or sides. This works similar to Bristleback’s namesake ability and makes Mars a tanky hero when faced head on, although it won’t protect him from magic damage or attacks from behind. Bulwark nicely complements Mars’ preferred playstyle, which is to get in the face of his enemies to pummel them.

From those three abilities alone, Mars definitely seems like someone you would want to keep your distance from. But to counter enemies from doing that and bringing them to where he wants them, Mars can use his ultimate ability — Arena of Blood.

This ability summons an arena lined with undead warriors that block enemy attacks and movement. Enemy heroes near the inside edge of the arena will be attacked by their spears, dealing damage and knocking them back. The arena will also block attacks (but not spells) coming from outside of it, letting Mars deal with any unfortunate heroes trapped in it with him.

You can check out Valve’s official blog post for a showcase of Mars’ abilities. Or you can see for yourself as the new hero is already live. Check back with us later for guides and other content on Dota 2’s latest hero.