Eren and Zeke return in the new year. The final clash of titans is fast approaching!

Attack on Titan Season 4 Part 2 is the gripping conclusion to the decade-long anime and manga franchise. The series will unveil the bigger conflict between the anti-Marleyan Volunteers and the residents of Paradis.

Here’s everything you need to know about Attack on Titan Season 4 Part 2 anime, including its release date, a quick recap of prior events in the series, characters and their voice actors, and the status of the manga.

What is Attack on Titan?

Attack on Titan is a fantasy manga series written and illustrated by Hajime Isayama. Animation studio MAPPA is currently producing the fourth and final season of the anime adaptation.

The story follows Eren Yeager, Mikasa Ackerman, and Armin Arlert who live in a walled country. The three walls of Sina, Rose, and Maria were made to protect their community from giant humanoid creatures known as titans.

While the population lived in peace for a hundred years, a Colossus Titan suddenly breached the trio’s hometown of Shiganshina and made way for smaller titans to wreak havoc in the city.

Seeing his own mother devoured by a titan, Eren vows to defeat the mysterious beings by joining the Survey Corps, a group of soldiers tasked to fight and observe titans outside the walls, with the help of Mikasa and Armin.

The final episodes of Season 4 Part 1 are primarily set in Eren’s hometown of Shiganshina after the Liberio conflict. The main character is looking to rejoin his half-brother, Zeke Yeager, to fulfill their titan euthanization plan.

The duo has adopted their own separate factions from their previous affiliations, namely Eren with the Yeagerists and Zeke with the Anti-Marleyan Volunteers.

Despite being held captive by Levi Ackerman and his thunder spear, Zeke purposely ignites the weapon to catch Levi by surprise and escapes with the help of another titan.

As one of the Volunteers, Yelena led the secret agenda of tainting their wines for the Eldian people with Zeke’s spinal fluid, granting his Beast Titan the ability to create titans with whoever drank the wine.

Yelena unveils the euthanization plan to the imprisoned Survey Corps members, leaving many of them, especially Armin and Mikasa, puzzled at Eren’s decisions.

With the Marleyan army still a threat, Eren orders Gabi and Pieck to cooperate with him as they are also Eldian. Now under the guise of being a new Yeagerist, Pieck brings Eren to the rooftop, only to be attacked by Porco Gaillard’s Jaw Titan and forcing him to turn into the Attack Titan.

The ruse then alerts the nearby Marleyan airships of Eren’s location, with Reiner getting ready to face his former ally once again. 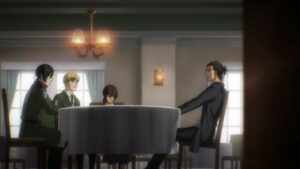 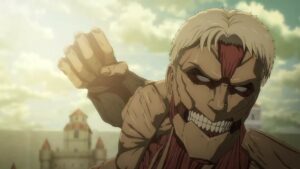 Here’s a quick rundown of the main cast and their voice actors heading into Season 4 Part 2 of the anime series.

The manga published its final chapter on April 9 and is now complete.

The hit manga series had an eleven-year publication run of 139 chapters compiled into 34 volumes.