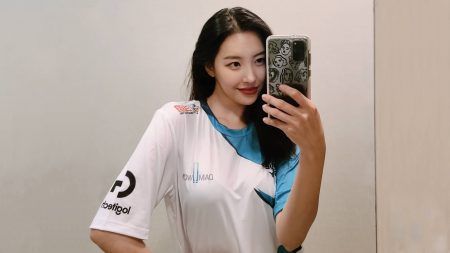 Other than k-pop (and possibly kimchi), Korea’s next biggest export is probably esports stars.

From Starcraft to League of Legends to Overwatch, Koreans everywhere are proud to celebrate these icons of the game for their clutch plays, insane mechanical skills, and championship-winning moments.

Celebrities are no exception to this rule, and you might even be shocked to find out that many K-pop idols are actually huge esports fans.

Here are five who can’t resist a good Ace.

She seems to be particularly fond of DWG mid laner, Heo “ShowMaker” Su, as she revealed that she has a jersey with his name on the back.

With ShowMaker’s insane mid lane plays, who wouldn’t be?

In between their lessons, Saebyeolbe and Haksal jokingly taught Niel how to flame enemies.

Niel is currently an honorary DPS player for O2 Blast.

Everyone knows that Day6’s main vocalist Jae (Park Jaehyung) is a huge League of Legends enthusiast.

He’s had a couple of collaborations with Gen.G where he was mentored by some of the team’s previous members and Worlds champions Lee “Crown” Min-ho and Lee “CuVee” Seong-jin.

Jae’s co-member and the band’s drummer Dowoon (Yoon Dowoon) even shared a bit of his fanboy moment for Gen.G.

“I only saw the pros through media like YouTube. I was so honored to see them in real life. I’ll always support Gen.G!” exclaimed Dowoon.

Additionally, Jae, Crown, and CuVee all composed a beautiful song on their other collaborative project.

Jae has been into Valorant (another Riot Games title) lately and is planning to compose a song dedicated to the game’s Vandal gun.

She cheered for the all-Korean Vancouver Titans team, who unfortunately lost to the San Francisco Shock led by Jay “Sinatraa” Won.

Former Wanna One member and Produce 101 winner Daniel Kang is a true fan of League of Legends. He has played a few matches with Worlds champions T1 and is good friends with bot laner Park “Teddy” Jinseong.

During one of their matches, Daniel addressed mid laner Lee “Faker” Sang-hyeok as “hyung,” a Korean honorific title used to address someone who is good.