How long until we get a Daniel-Jihyo stream? 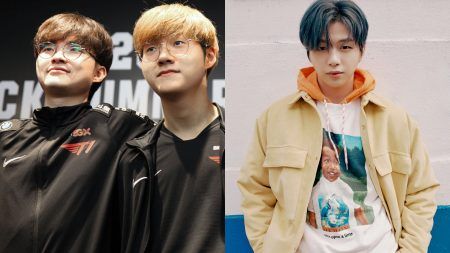 Fans were surprised when Daniel’s voice emerged during Teddy’s livestream. Daniel, Teddy, Moon “Cuzz” Woo-chan, Lee “Effort” Sang-ho, and Lee “Faker” Sang-hyeok all teamed up to play a couple of ARAM (All Random, All Mid) matches in League of Legends.

Throughout their games, Daniel confessed that he has been playing League of Legends way back since 2012 according to a fan-translated tweet. He is a top laner, and even gave fans an idea of his playstyle by using the champion Darius in their ARAM game.

The short match ended with a victory led by this four-man Tempered Fate from Teddy’s Bard.

The K-pop star revealed that he and Teddy virtually stumbled upon each other on the Rift, and then later on hung out in real life. On the day that T1 won a championship (the LCK Spring Split Playoffs, perhaps?), Teddy even came to Daniel’s house to play.

Daniel was also starstruck when he played with three-time Worlds champion and LoL icon Faker. He even asked for an autograph from the esports superstar.

With Daniel playing League of Legends on a live stream, will we also see his girlfriend Twice’s Park Jihyo in the Rift soon?