The new AoV map 4.0 will debut a day-night system similar to Dota 2 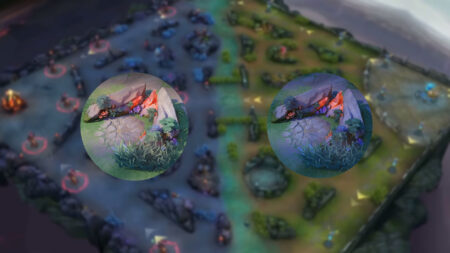 A huge change is coming to Arena of Valor as Garena and TiMi studios officially announce the AoV map 4.0 or Battlefield 4.0.

The AoV map 4.0 will add a day-night system, as well as upgrade Dark Slayer and Abyssal Dragon, the game’s epic monsters.

Arena of Valor gets a day-night system in AoV map 4.0

AoV will be introducing a day-night system in its map 4.0. The beta version showed how one of the jungle camps would look like during daytime and nighttime to give players an idea of this major update.

The new AoV map 4.0 will revamp the Dark Slayer and Abyssal Dragon

Both the abilities and buffs of these AoV monsters will be revamped soon, and will be fully revealed when AoV map 4.0 launches.

In addition to the new map, Arena of Valor will also be celebrating its 5th anniversary. AoV had its worldwide release back in November 2016.