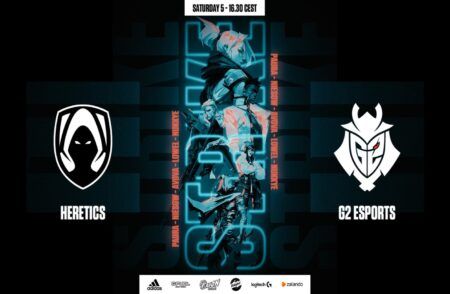 Team Heretics, in their first major tournament, have defeated the “kings of the EU” G2 in the semifinals of EU First Strike.

The team has been nicknamed the “titanslayers” by casters, after previously taking down Team Liquid in the quarterfinals.

Visibly upset, G2 fought to keep their crown on Split, even managing to get a 13-7 lead in Round 16. Their momentum ran out as Heretics, against all odds, managed to get lucky shots and the right frags in Round 23. This forced G2 into an eco-round, and thus, unable to match the firepower of Heretics come matchpoint. An ace from Heretics’ Nukkye sealed their win.

“Our enemies today were ourselves,” G2’s David “DavidP” Prin tells ONE Esports in a post-game interview. “We just choked. We didn’t handle our emotions and didn’t take advantage of our lead in the first map.”

On the contrary, Heretics felt that they handled everything perfectly.

“The attitude of the team was perfect all the time,” shares Heretics MVP and team captain Christian “loWel” Garcia Antoran in the post-series on stream interview. “It doesn’t matter if we lose one eco, it doesn’t matter if we’re losing. We just keep talking, keep helping each other. I think that was the key to win.”

Team Heretics were overjoyed with their win and happy to share it on their social media.

“I’m speechless. It feels awesome to beat G2,” says Lowel. “They are the top one team right now. It feels amazing to go to the finals.”

Heretics will go up against fellow underdogs SUMN FC in the grand finals of First Strike EU, on Dec 6, 11:30 p.m. (GMT+8) on Valorant Esports EU Twitch and YouTube.