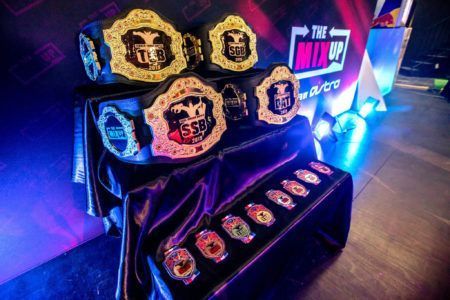 The Mixup 2019 was just like its name, blending a Capcom Pro Tour Premiere and a Tekken World Tour Master event.

Taking place over the weekend in Lyon, France, the fighting game community showed up, with 239 attendees for Tekken 7 and 197 for Street Fighter V, according to EventHubs.

Legend Daigo “The Beast” Umehara was primed to take his first major tournament of 2019 as he tore through the competition beating out Hajime “Tokido” Taniguchi, Ryo “Dogura” Nozaki, and Amjad “AngryBird” Alshalabi from the upper bracket to get to the grand finals.

Punk, on the other hand, was sent to the lower bracket by AngryBird during their top eight match up. He then faced Tatsuya Haitani, Benjamin “Problem X” Simon, and finally redeemed himself against AngryBird.

In the grand finals Punk quickly adapted to Daigo’s new in-your-face strategy and showed that Karin was better suited for such a playstyle. Daigo had all the momentum during the last match but Punk would not be denied, mounting an amazing comeback to beat the legend and take home first place along with US$7,540 and 700 Global CPT points.

Punk has shown incredible tournament placement consistency as he sits on top of the global leaderboard for Capcom Cup 2019 while Daigo’s new and aggressive strategy with Guile has managed to take his opponents by surprise.

Meanwhile, for Tekken 7, a Cinderella story was developing as native Tekken 7 pro, Vincent “Super Akouma” Homan, reached deep into the upper bracket but lost a close best-of-five set to Jae-hyun “CherryBerryMango” Kim during the winners finals.

Super Akouma then defeated Tekken 7 Evo 2018 champion Sun-woong “LowHigh” Yoon in an unbelievable losers final match up to set up the rematch against CBM.

With the stage set and the home town crowd fully behind Super Akouma, he picked up the pace to beat CBM’s Jin Kazama 3-0 to reset the bracket and then proceeded to complete the comeback by winning the final set with his unique Akuma rush-down playstyle.

Super Akouma won the first Tekken World Tour event of the year along with US$3,040 and 300 TWT points, while CherryBerryMango takes home a respectable US$1,520 and 200 TWT points.

The next Capcom Pro Tour Premiere and Tekken World Tour event is the Northwest Majors 11 taking place on April 27 to 28 at Gameworks Seattle, USA.