The Frenchman climbs up to fifth on the TWT global leaderboard. 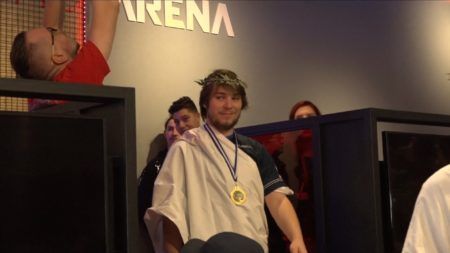 The grand finals was a rematch of the winners finals, which Super Akouma won 3-1. Super Akouma stuck to his trusty Akuma throughout, while JeonDDing switched to his secondary character, Lucky Chloe.

Super Akouma got off to a quick start, and seemed to have JeonDDing figured out from the get-go, with a quick meter-burn combo and a punish to take the first round.

While JeonDDing managed to tie up the score 2-2, he was unable to close out the first game despite hitting a huge Rage Art and then following it up with a while-running low, as Super Akouma was able to counterattack with a meter-burn uppercut to take the first game.

For game two, JeonDDing switched to back to his more reliable main of Eddy Gordo, and immediately played better, taking the game 3-1, thanks to some tricky mixups.

However, JeonDDing was unable to maintain momentum and Super Akouma took game three with ease, winning 3-0 and finishing off round three with another huge uppercut.

In game four, with the score tied 2-2 and time running out, Super Akouma tried to finish off JeonDDing but ended up overextended and left himself open to a counter-hit, which JeonDDing gladly took advantage of, immediately launching Super Akouma with a deadly combo, to take the game and tie up the score.

Game five again went the distance, with the rounds tied up 2-2. But with time ticking down and JeonDDing holding a life advantage, Super Akouma had no choice but to run in and attack. Unfortunately, JeonDDing laid low (literally) and ran down the clock to get the reset.

The second set started with another close game, with the score again tied 2-2. With time ticking down, it looked like Super Akouma would face a repeat of the previous game, but this time he caught JeonDDing with a huge launch, and then comboed it into a Rage Art to take game one.

Game two was a nearly perfect repeat of game one, with the score tied 2-2 and time again running out. This time Super Akouma hit JeonDDing with a big meter-burn combo and then finished it in style with his Rage Art finisher.

For game three, Super Akouma broke the cycle and managed to close out the final game 3-1 with another big meter-burn combo and his third finishing Rage Art of the set.

With his triumphant win, Super Akouma went home with US$500 and 150 Tekken World Tour points, moving up to 5th place on the TWT leaderboard.

The next Tekken Master event will be REV Major in Manila, which will happen on September 28-29.