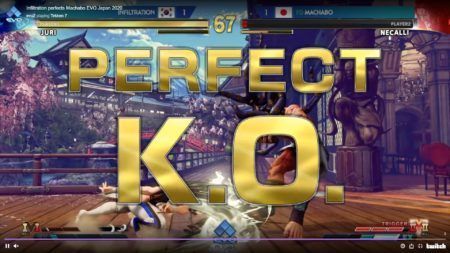 While Evo Japan wasn’t part of the CPT, it was still an incredible stacked tournament featuring many of the best players in the world.

This was also the first tournament to use the new V-Skill II abilities.

Here’s a look at the best plays from the two days of action:

Joe “MOV” Egami had one of the sickest highlights of the tournament with his Chun-Li. First, he read Nathan “Mister Crimson” Massol’s initial attack and scored a Crush Counter that ended with a hard knockdown.

MOV then pushed Crimson into the corner and got the stun. He then finished the round with an aerial reset combo.

Du “NuckleDu” Dang struggled with Yusuke “Momochi” Momochi’s defensive Poison, but he eventually found a way to open up his opponent and clutched out an impressive 0hp comeback.

Masahiro “Machabo” Tominaga perfectly timed a counter-hit on one of Seonwoo “Infiltration” Lee’s pokes and finished the round with a Critical Art.

However, Infiltration answered back with his own masterful Juri performance that earned him a perfect round.

Kensuke “Trashbox” Ishikawa caught NuckleDu with a Critical Art anti-air that almost won him the round.

Trashbox attempted to close out the round with an instant overhead jump-attack but NuckleDu blocked it and clutched out another impressive round.

Naoto “Sako” Sako continued to impress with his insane Menat expertise. He showed how good the character is with her new V-Skill II against Machabo.

Sako continued to make use of the new V-Skill II abilities. He used his pocket Kage and clutched out this round against NuckleDu with a Sekieiken.