Bonchan shows everyone once again why he is the best Street Fighter V player in the world right now. 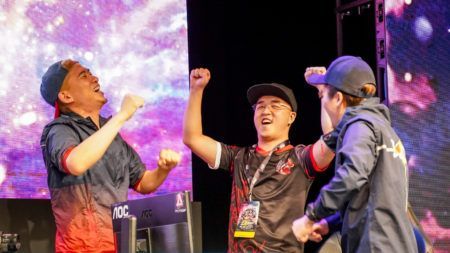 The first round was closely contested, but NL who was able to clutch it out by landing a throw into Urien’s V-Trigger.

NL wasn’t going to let Qiuqiu win their set easily though, as he was able to steal a round away by landing a low hit and confirmed it into a Critical Art.

Qiuqiu eventually took the game for Team Bonchan by defeating NL with a well-timed fireball, evening out the score at 1-1.

Bonchan stepped up next for his team and surprised everyone by locking in his character choice with Sagat during the grand finals. He was then able to defeat SigurRos’s F.A.N.G. in a nailbiter of a final round, to put his team at tournament point.

As the last man standing for Team Korea, Verloren then went up against Qiuqiu. Qiuqiu took the first round with ease, but Verloren was able to clutch out the following round and also pulled off an impressive comeback victory, which took the finals to one final game.

The final game of the match was between Verloren’s Cammy up against Bonchan’s Sagat.

Verloren looked poised to win it all, as he defeated Bonchan convincingly in the first round.

However, Bonchan was able to stay alive by clutching out the second round with an EX-low Tiger Shot, despite Verloren having full meter available.

With the score tied 1-1, the entire tournament came down to one final round.

Verloren started off strong and landed a string of high damage hits, putting Bonchan at just one hit away from death. But Bonchan managed to land a huge Critical Art, evening up the life deficit.

With both players one hit from death, Verloren had the advantage with his V-Trigger and Critical Art both available, but Bonchan was able to land an incredibly risky standing Tiger Shot, winning the match for his team and securing the first-ever ONE Street Fighter Tokyo Challenge title.