Ryusei is a real threat against top players during tournaments. 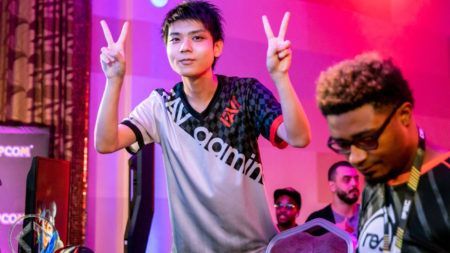 In all the hype about Masato “Bonchan” Takahashi overtaking Victor “Punk” Woodley in the Capcom Pro Tour rankings, there was one series that was easily one the best  at the event.

Taking on the then number one ranked CPT player Punk was Ryusei “Ryusei” Ito, who was the EVO 2017 BlazBlue: Central Fiction champion, and has a habit of upsetting top tier players in Street Fighter V — having defeated Benjamin “Problem X” Simon during the Taipei Major.

The two were matched up early in the tournament and, after the first set, it seemed as if Punk was going to advance through his pool onto the Upper Bracket of Day 2.

Ryusei answered back with two quick rounds of his own. Not only did he even up the score, but he also let Punk know that he was familiar with the Urien versus Karin matchup. After Punk landed a wakeup Dragon Punch, Ryusei chose to quick rise and throw out an EX-Chariot Tackle that beat out Karin’s EX-Tenko.

Ryusei kept his momentum going by testing out Punk’s reaction time after he used his V Skill. Punk was punished with an EX-Headbutt and then had to play defensive for the rest of the round.

With his back against the wall, Punk caught Ryusei dashing too far forward and took the match to a final round.

At the start of the last round, Punk was one hit away from stunning Urien. As soon as Urien got up, he threw out a grab that whiffed, but followed it up with an insane EX-Headbutt. Punk landed a timely counter-hit. However, instead of going for more damage, he opted to pin Ryusei in the corner. Ryusei then finished the match with his V-Trigger combo and upset one of the tournament favorites at Celtic Throwdown 2019.

SEE MORE: Bonchan dominates at Celtic Throwdown and claims the top spot in the CPT rankings