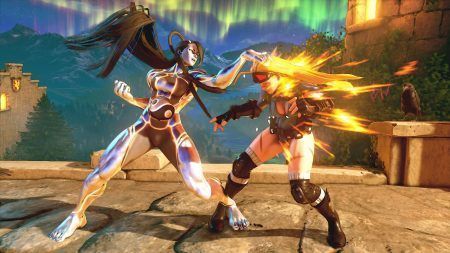 For Seth’s normal attacks, he has a three-frame crouching jab and an overhead attack with the forward heavy kick. While his jumping light kick is his cross-up attack. Seth’s crouching medium kick is also cancelable into his special moves.

Seth has two target combos, the first can be finished with any special move, while his second target combo requires V-Skill activation to extend the combo.

Hecatoncheires (QCF + punch) is a ground attack similar to E.Honda’s Hundred Hand Slap. This attack isn’t safe when blocked, but can be used as a combo-ender.

Cruel Disaster (QCB + kick) is a pirouette roundhouse kick that knocks down opponents on hit. The heavy kick version of the move will increase the attack’s spin duration, but also does more damage.

Annihilate Sword (QCB + kick while jumping) is an air axe-kick reminiscent of Makoto’s Tsurugi from Street Fighter III: 3rd Strike and Street Fighter IV. This move is primarily used as an anti-air attack that can be linked after an air-normal attack. It can also be used as a quick meter builder.

Interestingly, Seth does not have a projectile attack. He also’s lost his teleport from Street Fighter IV.

V-Trigger II Tanden Maneuver summons a black and white sphere that can be moved in different directions. When the sphere is moved downward, this will cause the opponent to be launched into the air. Tandem Maneuver is just two bars so it is possible to activate it twice in one match. Seth’s V-Trigger II is mainly used as a setup tool to open up opponents.

Tanden Destruction (two-QFC + punch) is an instant attack that vacuums opponents into Seth’s black and white sphere. He then channels all his power into the sphere and launches the opponent out of it, which deals a significant amount of damage. The super can also be boosted into a Tanden Extreme Critical Art if Seth’s V-Skill I is activated.

Seth will be available to play on February 14, 2020, when Street Fighter V: Champion Edition is officially released.