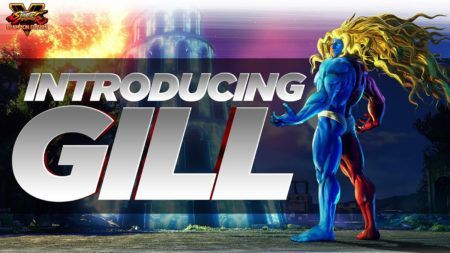 After rolling out some of the new V-Skill IIs on their Twitter page, Capcom has decided to go into further detail with a 49-minute stream on their Twitch channel.

They have also decided to release a breakdown video of Gill, the newest member of the Street Fighter V roster. Here’s everything you need to know about all the characters and their new abilities:

Gill’s V-Skill I is a meteor-like projectile that falls from the top of the screen and shares the same element as the player’s chosen V-Trigger. If the projectile hits, the opponent is then put into either a burning (loses health over time) or freezing (stun gauge does not recover) state.

His V-Skill II is a parry with the standing version countering high and mid attacks, while the crouching version works on low attacks.

Gill’s V-Trigger I powers up all his fire-based normal and special attacks. It also unlocks Burnstorm and Flame Javelin.

Gill is the only character in Street Fighter V that does not have a Crush Counter button. Instead, he has the Retribution system. If he puts an opponent into a burning or freezing state and then strikes them again with an elementally opposed attack, players can then extend their combos and set-up opportunities.

Birdie’s V-Skill II allows the player to move around with a bubble gum bubble in front of his head.

The gum can block projectiles, can be used as a projectile, and can be charged three times to increase its range of effect.

Urien’s V-Skill II is another charge-up move that improves his Metallic Sphere fireball into a huge oblong projectile that has varying speeds depending on heavy, medium, and light punch commands.

Sakura’s V-Skill II is a dive roll that can be extended with a jumping knee attack at the end.

The move was shown to cover a good amount of distance, which will let players avoid incoming mix-up attacks or chase down opponents back-dashes.

Dhalsim’s V-Trigger II is a buff to his Yoga Flame fireball.

The charge-up move can be used on the ground or in the air and it makes the Yoga Flame fireball a two-hit attack that can also bounce off the floor.

The charge-up move will lose its effect if the player is either hit or when the player uses a standalone special move.

Poison’s V-Skill II’s cartwheel is a tricky cross-up move that can be finished with a special move.

Her V-Skill II has both offensive and defensive bonuses that players can utilize to throw off their opponents.

Kage’s V-Skill II is a somersaulting “dome crusher” but it looks quite underwhelming.

His V-Skill II with V-Trigger I activated is not invulnerable to projectiles. It also isn’t an overhead attack.

READ MORE: Capcom Cup 2019: Everything you need to know about the biggest Street Fighter V tournament of the year