Warning: This song WILL get stuck in your head. 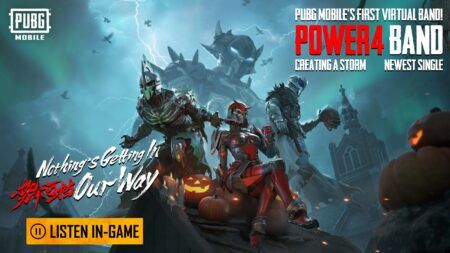 Power4 is a four-man power metal band featuring edgy group members, Lady of Blood as the lead singer, Wraith Lord as the bassist, Grave Lord as the guitarist, and Spike Demon as the drummer.

PUBGM is holding a poll on their Twitter page to determine who the leader of the new band will be.

The bands first single, “Nothing’s Getting In Our Way,” is full of strong rhythms and hardcore beats. Paired with Lady of Blood’s intense vocals and the music’s meaningful lyrics, we found ourselves singing Power4’s debut song over and over again. The band also brilliantly managed to include PUBG’s famous “Winner winner, chicken dinner” line into the pre-chorus.

Players can listen to “Nothing’s Getting In Our Way” when they log into the game, or if you’re too lazy to load up the game, right here:

Additionally, players can grab all four of the band’s outfits through the Lucky Spin at 60 UC, or by pressing 10 times for 600 UC at once.

PUBGM has introduced musical acts in the past, bringing big names like K-pop group Blackpink inside the game. Their esports tournaments have presented special guests as well like DJ Alan Walker and rapper Rich Brian.

Virtual groups have been on the rise in gaming lately, with League of Legends’ all-girl squad K/DA at the helm. LoL also has another musical group called Pentakill which is closer to Power4’s genre.