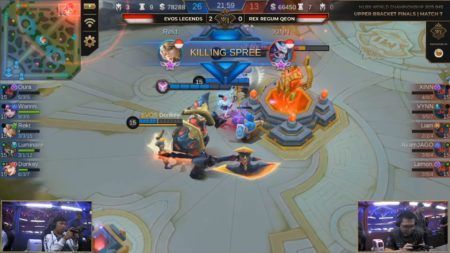 The Upper Bracket Finals of the MLBB M1 Championship was a clash between Indonesia’s two best teams, EVOS Legends and Rex Regum Qeon, and a rematch of the MPL Indonesia Season 4 Grand Finals, which EVOS won 3-1.

EVOS pushed for an aggressive start in the first game. By the 5-minute mark, they were invading RRQ’s mid-tower for some quick takedowns. RRQ had a weak defensive effort, urging EVOS to hide in the jungle as RRQ did its map rotations. With just one stunning kick, Donkey assisted Wannn into getting a kill on Lemon.

Five minutes later, EVOS took down the Lord to strengthen their final push, and with RRQ behind in kills and gold, they couldn’t suppress EVOS from entering their base. With Wannn and Oura taking the last defenders, the rest of EVOS destroyed the base inhibitor to take game one.

RRQ tried to switch up their playstyle by focusing on map initiatives such as the taking of Lord and Turtle, and with both teams getting a turtle each, it seemed that RRQ was holding fairly well against their rivals.

With the bottom lane completely open to the base inhibitor, RRQ was nearing its way to a win, and even though EVOS was able to take the Lord, AyamJAGO and Vynn were able to take him out of the equation.

However, things started to turn sour for RRQ when they had to face EVOS’ three-lane push. By the 20-minute mark, EVOS was able to clear all of RRQ’s towers with Wannn, Donkey, and Luminaire keeping RRQ busy in the bot lane.

After acquiring another Lord, Evos sieged the base inhibitor and completed the comeback, taking a close game two.

With their backs against the wall, RRQ looked desperate in game three. With AyamJAGO now using Harith, he provided some mobility in terms of clashes and takedowns. The rest of RRQ were out for blood too, answering every time EVOS got a kill.

However, EVOS’ star player Wannn was putting the pressure on the enemy team, and at the 5-minute mark, he secured a triple kill in the bot-lane, leaving only one bot tower to defend.

EVOS’ quick transitions from split-pushes to team plays was a definite late-game advantage. With six towers down compared to RRQ’s one, EVOS had enough laning pressure to hunt between pushes.

Late in the game, RRQ finally had enough power to start pushing their lanes, which forced EVOS running back to base to defend. AyamJAGO made an incredible dive into EVOS’ base, getting a solid 25% off of their inhibitor before he was taken down.

After EVOS acquired Lord for the last time, RRQ initiated a clash right in the middle of the map. With just one stun from Oura, Wannn easily added a few more kills to his name. Although Xinn stayed alive and took out Oura, Rekt kept the last RRQ player busy as the rest of EVOS marched their way to the finish off RRQ’s inhibitor with the Lord, completing the 3-0 sweep.

Evos will now head to the Grand Finals while RRQ will get another chance to come back in the Lower Bracket Finals against Malaysian team Todak.

You can check out the full VOD in the link down below: