Marksmen in ML will never be the same. 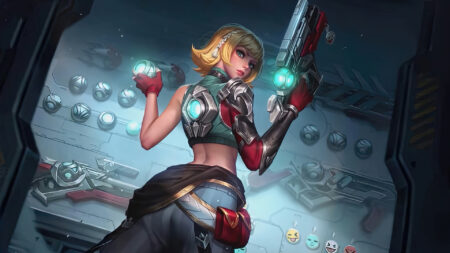 You’ve got to admit, ever since Brody, the last five Mobile Legends heroes have had really cool character designs.

Brody has a wind up basic attack and a stacking AoE ultimate who feels and plays differently from all other marksmen in-game.

Benedetta swishes and slashes with incredible mobility, a super high skill cap assassin that forces you to react faster than you blink.

Paquito is even more fancy than Chou, with a combo that’s entirely based off his double cast Champ Stance passive.

Out of these, only Mathilda and Yve can be considered beginner-friendly. Even then, Moonton made sure to give them some spice. Mathilda’s ultimate sends her to the skies, giving circles a new reputation. Not to be outdone, Yve has an ultra unique ultimate that’s practically a minigame within MLBB.

Then comes Beatrix, who broke another boundary in Moonton’s game design because, clearly, four guns are better than one.

When I learned of her skills, the first thing that came to mind is what a stark difference Beatrix is compared to the game’s first few marksmen — or markswomen — Miya and Layla, even after their Project NEXT updates.

In terms of complexity, she basically rivals Benedetta and Paquito. Not only is she a marksman with no fixed combo, the player must also decide every single game which two guns to hold out of the four based on many factors: Enemy team composition, stage of the game, opposing laner, and the conditions of each skirmish or upcoming team fight.

All this cannot be taught through a guide — Beatrix needs to be played to be properly experienced.

A hero that isn’t available for free, this means that if you plan on purchasing her, consider wisely. You’ll need to put in many hours of work to master her even though she’s considered massively overpowered right now. Besides situational awareness, to play her you’ll also need high skill shot accuracy, for her guns and ultimates all require good aim.

Not to mention, nerfs will likely ensue, which also means your decision making needs to be tight.

Out of all her guns, Bennett is the slowest and most mage-like for it does AoE damage in circles, and the one I dislike the most because it’s the easiest to dodge. Wesker is a shot gun that requires you to step up, while Renner and Nibiru are the two that will make you feel like a traditional marksman.

As if her gun functions aren’t complex enough, their names are pretty unique too. After being confused for a good minute, I found it much easier to identify them by their colors. Even better if you’ve played League of Legends before, for her ultimates are similar to Jhin, Ziggs, Miss Fortune, and Graves.

At the pro level, Beatrix is effectively the all-in-one marksman option. Tactical Reposition is not a guaranteed tool to escape, so expect teams to draft around her to help her shine. At the same time, you can be sure they’re also working out which heroes will best counter her, for she’s guaranteed to be 100% picked and banned.

Fun, bubbly, and full of energy, Beatrix is cute, and comes with a hint of mania in her eyes.

She could very well signal where Moonton’s game design is heading in the future. While it is important to have new (and sometimes free) heroes that are easy to pick up and appeal to the the majority of the player base, there’s also room for complex ones as more and more are added.

Even with simplier heroes, Moonton included that extra spark in Mathilda’s and Yve’s ultimate skill, which adds another dimension to their gameplay.

From Brody to Yve, all the new heroes have been S-tier picks in ranked and competitive games. They require a new style of gameplay, new ways of thinking, and more demanding mechanics.

Beatrix tops them all however, because having four guns and a total of nine skills adds yet another layer of complexity, for you and you alone have to select which weapons to deploy at any point in time. This gives the player more room to experiment, to challenge, to enjoy.

With Beatrix, we now have heroes with the highest skill cap in the game in the marksman, assassin, and fighter roles. Will Moonton soon release equally challenging mage and tank heroes?

I certainly hope so.