Arguably the best Legendary skin in the game. 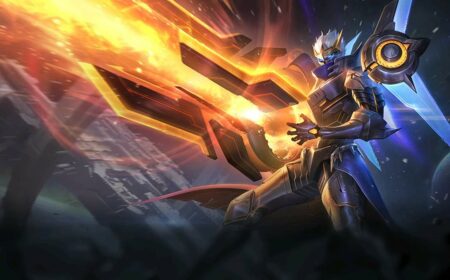 Mobile Legends: Bang Bang has released the trailer for the newest Legendary skin to grace the Land of Dawn and it will surely deplete everyone’s wallets — Starfall Knight Granger.

The skin features Granger in a complete mech suit with menacing glowing blue eyes and anime-inspired white hair. He finishes his Gundam-inspired look with a futuristic laser pistol in his right hand and a laser cannon in the left.

In the teaser trailer, Granger, all alone, is seen facing a fleet led by Cosmic Gleam Gusion. But just when you think Granger is done for, he transforms his space cannon and fires a shot that completely destroys Gusion’s space army. Badass!

What really makes this skin one of a kind is its visual upgrades. First off, his ability icons and the bullet count on top of him have been changed to match his skin. The skin will also have custom recall effects.

For his abilities, Granger now shoots lasers instead of bullets with Rhapsody. Every time he uses Rondo, he opens a rift below him for a short time.

Lastly, he shoots a meteor-like bullet with Death Sonata that leaves a fiery trail in its wake and explodes when hitting an enemy

Starfall Knight Granger will be released in the in-game Magic Wheel soon.