We live for idols in stunning pink hairstyles.

Twice Chaeyoung has captivated us in her new pink hairstyle as seen in the “Taste of Love” album trailer.

The South Korean rapper has turned a few heads, including League of Legends fans, with her fresh look.

Phenomenal K-pop girl group Twice is entering a new era with the upcoming release of their tenth EP, Taste of Love.

All nine members are back in the spotlight with stunning looks, including their rapper Chaeyoung.

For the first time, Twice Chaeyoung showed off her permed locks in a lovely pink shade. We’ve already seen Chaeyoung in pink hair during Twice’s “Fancy” era, but this time, her hair has grown long enough to twist into pretty curls.

This hairstyle reminds us of League of Legends mage champion and virtual songstress Seraphine. Seraphine debuted last year not only as a playable character in Riot Games’ multiplayer online battle arena (MOBA) game but also as an up-and-coming idol.

With Chaeyoung’s pink hairstyle, she could easily pass up as Seraphine’s live-action version! 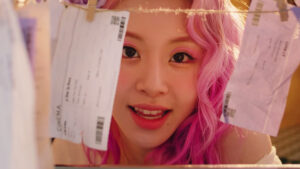 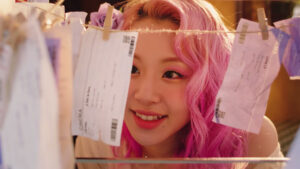 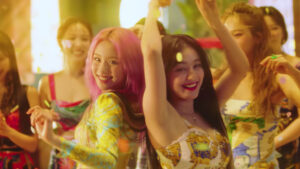 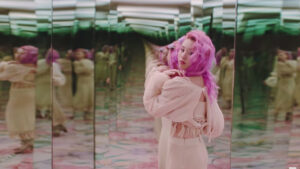 Aside from being idols and sporting rosey hairstyles, these two have even more in common! Chaeyoung’s group Twice and Seraphine were both featured in the “More”, a single within the “All Out” EP by LoL’s virtual girl group K/DA.

You can view more of Chaeyoung’s stunning pink hairs and amazing rap lines in Twice’s “Taste of Love” mini-album. Based on the album trailer, Twice will dive into some Latin rhythmic styles and show off fun, summer vibes.