TSM coach Parth: ‘North America has to level up’

It was another early Worlds exit for TSM. 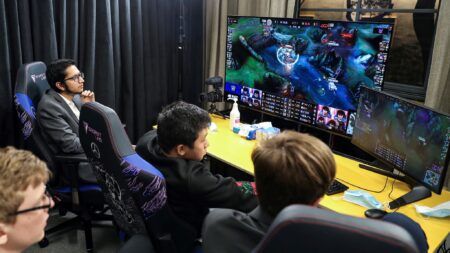 The 2020 League of Legends World Championship (Worlds) is nearing the end of its intense group stage, taking the best regional teams into the knockout portion of the tournament.

After TSM’s unfortunate 0-6 finish in Group C, ONE Esports talked with head coach Parth Naidu to discuss what’s next for the LCS team.

Despite experiencing an early Worlds exit, TSM still had two more games against Gen.G and LGD Gaming. While the results of these last two games no longer had any bearing on their final standing, we saw the likes of Soren “Bjergsen” Bjerg rocking a gunslinging Lucian and Mingyi “Spica” Lu putting the entire enemy team to sleep with his Lillia. When asked about TSM’s late resurgence in gameplay, Parth suggested that it all came down to the draft pick.

“Nothing drastically changed between what we were doing before and now,” stated Parth. “They decided to give us Lucian which is one of the power picks of the current meta along with some aggressive choices and I think our players thrive in those cases. It was more of a nature of draft and the game plan compared to other games.”

We also asked Parth about his thoughts on TSM’s impressive LCS Summer championship win in a double-elimination format, and what can be changed with the Worlds format to foster a better competitive environment.

“We were knocked out 3-0 in the first round and then we had to make our way through the loser’s bracket and beat every other top seed to win,” answered Parth. “I think a double-elimination format makes sense for the summer playoffs because the entire goal of determining who the Worlds qualifiers are is to see the top three teams at the time.”

As for the Worlds format, Parth believed that you have a lot of different factors to consider in order to reform it. If you want to have a strong narrative focus and a substantial change in the structure of games and their breaks, the double-elimination format would be an interesting option from what is currently used.

As one of the representatives of the NA region, the TSM head coach had some great insight on what the region was getting punished for on the world stage.

“I think one of the things that the NA region has constantly done is rely too much on their veterans and their leadership to carry them through their games,” Parth mused.

“For example, Team Liquid usually had four or five veterans on their team before Tactical and, if you play intelligently and pick slower team compositions for scaling in NA, you’re able to get away with it.”

As for TSM, Parth saw the reality of the punishes even when they tried to adapt from the usual aggressive picks and scaling options. While Bjergsen’s Zilean was a strong pocket pick in NA, they found that the champion was easily punished with aggressive junglers who worked off a mid-centric diving tactic.

“North America has to level up how they understand the game, give a lot more resources to some of their rookie talent and help develop them, and also make sure that they play a more aggressive game to prepare for Worlds,” Parth added.

With TSM handling a troop of LCS veterans like Yiliang “Doublelift” Peng and young talents like Spica, the head coach was adamant about having an even ebb-and-flow between the two kinds of players, especially at Worlds.

“Any good team is going to be a balance of veterans and rookies especially on the global stage,” said Parth. “You need the steady presence of the veterans to guide and align the team’s focus whereas the rookies bring a lot more energy and aren’t afraid to experiment with match-ups.”

He mentioned Suning’s Chen “Bin” Ze-Bin as a perfect example of a strong rookie. Parth observed that he’s able to take bigger risks that no other top-laner would take because he’s looking to add onto his experience as a new player.

While TSM’s Worlds run has been bittersweet, Parth was able to share what he’s most grateful for on this 2020 journey.

“I’m really happy for Spica and Broken Blade especially. I think BB came on to our team last year and he’s just this hard-working and talented guy; came in from Turkey and he finally had the opportunity to show what he can do,” said Parth.

“Spica’s also someone that I’ve kept my eye on since we had a scouting grounds three years ago. He’s developed into a really good player and I promised him that, in a year, I will make sure he’s playing on an LCS team — TSM or not — and I’m truly happy that he got an opportunity to play on ours. The rookies are the heart and soul of the team.”

When it came down to the various struggles that TSM faced throughout the season, Parth was also very grateful for their return as LCS champions after a two-year drought. While their Worlds run was disappointing for the players and staff, the coach hopes that everyone continues to give our players chances.

“Everyone here tried as hard as they could and honestly the teams in our group were just better,” said Parth. “But I’m really excited for these players to go back home, think about the things they’ve learned, put in 120% next year, and then come back swinging even stronger.”