MAD Lions’ Orome: ‘Right now I’m most grateful for being at Worlds with my teammates’

Here are his thoughts post-Worlds 2020. 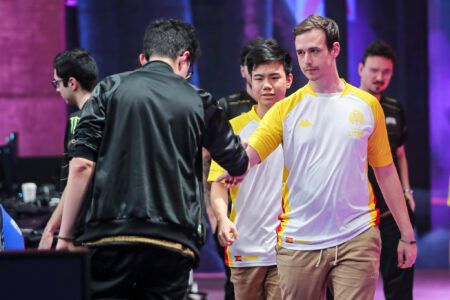 While the match went the distance, and it was one of the closest of Worlds so far, unfortunately, this was the end of the line for MAD Lions as Supermassive emerged as the better team.

Contrary to what fans would think, MAD Lions’ Andrei “Orome” Popa revealed that the LEC team was really calm and collected backstage.

“I think we were all really positive throughout the series, like you should be. You should never go into a game thinking that you will lose or that you are disadvantaged or anything like that,” claimed Orome.

“Everyone was relaxed, especially after the first game even though we lost.”

Orome is MAD Lions’ top laner, hailing all the way from Romania. He was already playing with Splyce before they rebranded to the MAD Lions team we know today. He is known for his Renekton top, having a 70% win rate throughout all his games for this season.

Orome was really thankful for the the coaching staff which mainly consists of Peter Dun and James “Mac” MacCormack. The analysis that they have given to the players greatly helped the team during this BO5 game according to the top laner.

When asked what he’s most grateful for right now, Orome gave us the sweetest answer we have ever heard.

“I guess right now I’m most grateful for being at Worlds with my teammates. I won’t choose to be here with anyone else,” he began.

“I’m also grateful that I’m able to be here because there was no fourth seed until this year and when we came first there was the opportunity at Worlds, which was really insane and I am really grateful for this.”

LoL Esports have added a fourth seed to LEC and LPL leagues for generally performing better in the past months.

Before their big fight at Worlds, Orome mentioned in an interview with Inven Global that the public doesn’t really understand what goes on behind the scenes and has the tendency to hastily jump into conclusions. ONE Esports asked the young player what media and content creators can do to help pro players.

At first he hesitated and said that there is no good answer to the question, but later on changed his mind.

Throwback to the time when MAD Lions got into the LEC Spring Playoffs and gave G2 Esports a huge upset. Orome shared his struggles during that time, when he experienced a lot of pressure.

“I think the biggest hardship was the Playoffs because that was the first time I was so much under pressure. There were a lot of negative comments and stuff like this,” said Orome.

He has been trying to improve his mental game during MAD Lions’ biggest and most important moments as he has shared with ONE Esports.

“I think that’s like an ongoing process because for the first Playoffs I really crumbled under pressure. The second time it was fine, but now at Worlds again it was like a lot more pressure that I could handle at least for the beginning.”

Now that they are out of Worlds 2020, fans can be sure that Orome will be taking a break from using his social media accounts as his way of dealing with all the negative and toxic comments.

“Basically right off our game I never read social media because I know that it will be full off whatever people think,” he started.

“Basically, what I like to do is after the games I look at myself, I look at it with my coaches, and we analyze it. If I get flamed for something that we don’t consider bad, then I don’t care. If people are trashtalking me for stuff that’s like actually true, then it becomes a problem. It’s okay to be sad about it, disappointed at yourself, which is what happens in my case but it’s not okay to look at social media and be like ‘Oh this guy said I’m trash, he must be right you know.’ You shouldn’t let that get to you.”

Former LEC player and Team Liquid’s jungler Mads “Broxah” Brock-Pedersen even came into MAD Lions’ defense for all the hateful comments they have been getting during this time.

For Orome, playing on the Chinese super server for the first time “is a lot more fun” than doing solo queues on his regular EU server.

“That’s kind of like the main difference between EU and Chinese solo queue, like they are more willing to punish mistakes,” he said. “So it’s a lot more fun, I can say that much because you’re also going to this mindset and you’re like ‘Oh this guy [redacted] up, I’m going in.'”

Similar to his mid laner Marek “Humanoid” Brázda, Orome likes to take a break from solo queue when he gets really burned out. His stress relievers are meditation, going out with friends, and even playing a different game other than League of Legends.

“Everyone has needs that they need to fulfill daily for them to feel better, and to cope with stress, you need to identify those needs and fulfill them especially when the players are stressed.”

Orome also shared with ONE Esports the story behind his in-game name, outing as a huge fan of J.R.R. Tolkien’s The Lord of the Rings.

“So after watching Lord of the Rings like, three or four times, I was like ‘Hm, what if I buy the books?’ So I bought the books and there is one more book, oh The Silmarillion, which Lord of the Rings is part of, and I decided to read it. So it was a very complicated read but there was one character that I liked which was Orome.”

LOTR’s Orome is known as the Vala of Marksman, which translates to god of marksman.

“This was just in a period where AD carries were being name changed to marksman around season 3 or 4. I was an AD carry back then, so I decided ‘Oh this is a fitting name for me.’ Like it’s the god of marksman, I’m an AD carry, it’s just meant like that.”