Bdd and the boys return to the Worlds stage. 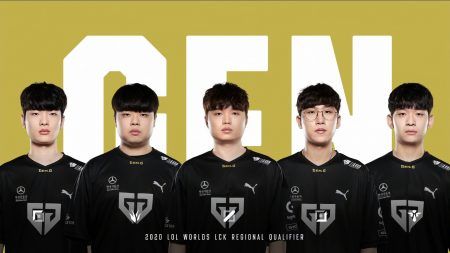 The 2020 LCK Regional Finals showcased another tense rivalry match between Korean superteams T1 and Gen.G. Though T1 has been known for racking up wins against Gwak “Bdd” Bo-seong and his squad in previous seasons, Gen.G has evolved out of its second-place mentality and easily came through with the emphatic victory against their rivals this time around.

Here’s how the sweep happened.

The opening game was a gradual back-and-forth between the teams. While Bdd’s Azir dominated the early-game phase, a few mishaps on Gen.G’s side gave T1 enough wiggle room to prevent a blowout.

As T1 started to diminish Gen.G’s gold lead, Choi “Ellim” El-lim went for the Mountain drake to bolster their front-line. T1 managed to secure the drake with Gen.G creeping at the lower side of the river, but they soon fell into a flurry of skills that disabled any form of retreat.

With Lee “Effort” Sang-ho’s Nautilus taking a hefty amount of damage after getting rooted by Ruler’s Senna, the rest of T1 did their best to thwart the ambush.

Seeing them close in on Nautilus, Bdd’s Azir went for the impressive flash-Emperor’s Charge combo and managed to lure most of T1 in the dragon pit. Kim “Rascal” Kwang-hee’s Volibear came in with the Stormbringer and tanked their attacks while Kim “Clid” Tae-min’s Graves and Ruler’s Senna cleaned up the fight.

With the impressive comeback, Gen.G ran it back through the bottom lane and managed to pick off Faker’s Ekko with a pinpoint Dawning Shadow. Now gaining the 4v5 advantage, Rascal’s Volibear led the charge with another Stormbringer while the rest of Gen.G took down the Nexus.

After a close fight in game one, T1 opted for a more aggressive team composition with Effort playing Pantheon alongside Lee “Gumayusi” Min-hyeong’s Ashe. The composition worked well with T1 grabbing the lead in both gold and kills by the 21th minute.

To bolster their laning dominance, T1 prioritized getting the Baron early and possibly finishing the game in the next clash. Unfortunately, Gen.G caught wind of their Baron attempt and immediately responded.

With Effort’s Pantheon getting spotted by himself in the jungle brush, Faker’s Sylas tried to retaliate with a stolen Showstopper on Gen.G. Though Gen.G took some impact damage from the ult, Bdd’s Sett did the same to T1, giving Ruler’s Ezreal some instant free-hits in the fray. Ezreal came out of the fight with an incredible quadra-kill while the newly respawned Renekton took care of the stray Pantheon.

Gen.G tried their luck at the Baron, managing to get through half of its health before being detected. With Faker teleporting a bit too early into the river, Gen.G immediately backed off the epic monster and surrounded the T1 mid-laner.

Even though Faker was able to get away with a chain pull, Bdd’s Sett rounded them up with a Facebreaker and prompted the rest of Gen.G to follow up on the damage. With Ruler’s Ez taking a solid triple-kill and Rascal’s Renekton taking Canna’s Jayce down, Gen.G pushed through the top lane turret and claimed their second Nexus of the series.

Just one game away from winning the Regional Finals, Gen.G played safe and focused on drake captures rather than kills in the third game. On the other hand, T1 looked for every opportunity to cut Gen.G down from the get-go.

Despite T1 having a bigger kill-count, Gen.G had already taken down the first two turrets in the mid and bot lane. Rascal’s Volibear soon followed up with an incredible tower-dive solo-kill on Canna’s Renekton.

Faker’s Orianna initiated a shockwave to slow down Kim “Life” Jeong-min’s Sett near the river, but the support player quickly turned around and delivered a massive suplex on top of the T1 squad. While Life did fall to Gumayusi’s Ezreal, Ruler’s Aphelios was able to even things out with a kill on the T1 ADC.

Gen.G steadily dominated the map with the capture of the Mountain Soul and the Baron buff. Now sporting a near 10k lead over T1, the team was confident in pushing their luck at the inhibitors despite having the T1 squad inside the base.

As the Baron-buffed minion waves inched closer and closer to the Nexus, Bdd’s Ekko instantly deleted Gumayusi’s Ez who was mistakenly positioned in the frontline. Riding a 4v5 advantage, the tanky frontline of Racal’s Volibear and Life’s Sett easily manhandled the remaining defenders while the rest razed through the final turrets and Nexus.

With the Regional Finals win, Gen.G has secured the third LCK slot in Worlds 2020 and will enter the cross-region tournaments in the Group Stage (formerly Play-In).

Worlds 2020 will begin on September 25 in Shanghai, China.