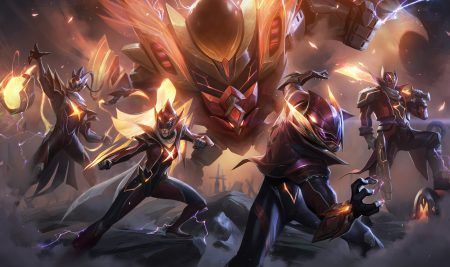 The Summoner’s Rift will be decorated in fiery red and yellow hues as Riot has just unveiled the FunPlus Phoenix’s 2019 World Championship Finals skins.

The skin line honors the Chinese team’s victory during at Worlds season 9 over European squad G2 Esports. The 2019 winning roster have chosen their best champions from the BO5 series last year.

Mid laner FPX Doinb, in particular, chose Malphite as a tribute to his wife, Tang Xiaoyo, who has been very supportive of his professional career.

Each FPX skin boasts a unique recall animation designed by the team members themselves, with their respective signatures flashed at the end.

Aside from the blazing particle effects and the iconic phoenix logo, some of the animations showcase special dance moves like this one from Doinb.

The FunPlus Phoenix 2019 Worlds skins will be priced at 1350 RP each and will soon be available for testing on the LoL Public Beta Environment (PBE).