Everything you need to know about Seraphine, League of Legends’ newest support

You can’t stop the music. 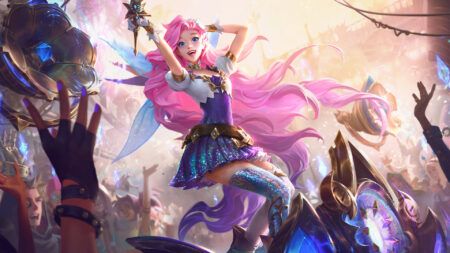 The wait is over. Teased for five months over her own fictional social media accounts on Twitter and Instagram (@seradotwav), League of Legends fans kept throwing out guesses on who Seraphine is and what her abilities were.

Set to be released on patch 10.22, Riot Games has revealed all her abilities and her unique three-part ultimate skin.

Since her very first social media post in June, Seraphine was primarily distinguished by her long ombre pink hair and baby blue eyes, reminiscent of Zoe. She also has a trademark light blue star on her cheek that never seems to fall off.

Over the last few months we’ve seen Seraphine in different outfits in different environments. Fans quickly discovered that she was a singer-songwriter, as she even released a few of her own covers, including POP/STARS.

Her links to K/DA became obvious, and it was confirmed that she was doing a collaboration with them. Everything fell into place when Riot finally announced the new K/DA skin line called K/DA ALL OUT, which included an ultimate skin for Seraphine.

Her three ultimate skin forms from left to right are called:

She is the first champion in League of Legends to be released with an ultimate skin with five tied quests. Priced at 3250 RP, once you purchase it, you’ll start with base pink haired Seraphine as seen on social media.

According to Riot, after you complete three missions in her questline, “you’ll unlock the Seraphine that was discovered by Evelynn, a more confident musician who has fans of her own right and a wealth of talent that is recognized by all”.

Once you complete the final two missions, you’ll unlock her K/DA skin, “the Seraphine that is the fully realized collaborator of K/DA and pop star”.

Unlike Sona’s ultimate skin DJ Sona, you cannot change between Seraphine’s three forms in-game. You will only be able to select them during champ select.

The bundle also comes with two icons, an emote, and a border that can be earned as a part of the narrative questline that unlocks when the skin is purchased.

Her ultimate skin is so complicated that Riot had to dedicate a whole page to explain it. The LoL community has also produced comprehensive guides to help you out.

According to Riot’s QA Lead Katey Anthony, K/DA ALL OUT Seraphine can drop from loot. Like other ultimate skins, the drop will be permanent and come with the questline which has no expiry date. LoL players will be able to complete the questline in any matchmade queue.

However, Seraphine’s accessories (emote, icons, border) won’t be sold separately, as they are tied to the quests.

As expected, her entire champion design is based on her identity as a singer-songwriter.

The most unique part about Seraphine’s kit is her passive, which causes every third basic ability cast to echo, automatically casting it a second time. This means she can output double of the same spell and adapt to every situation.

Besides similarities to Sona’s kit where W is a heal/shield and her ultimate is an AoE crowd-control burst, Seraphine’s E builds upon applied crowd control. If enemies aren’t slowed, Beat Drop will slow them. If they are already slowed, they become rooted — which can proc off her passive.

Lastly, if enemies are already rooted, they will be stunned. This mechanic has a similar concept to Samira’s passive.

Role as a support

The LoL community has been vocal about how Serahpine is basically Sona 2.0. In their champion insights, Riot explained that “Seraphine’s kit encourages players to group up around Seraphine and play together” — which is what Sona wants players to do as well.

As mentioned, her passive is most unique for it modifies her basic spells. She can increase damage (like Sona), provide unique buffs, and the occasional heal. Design wise, Riot put a lot of effort into the pop star, musical aspect of this champion.

Hailing from the city of Piltover, Seraphine’s tagline is “the starry-eyed Songstress”. Like every star that’s born, she loved music and loved singing since young.

Her supernatural ability developed over time. Seraphine started to discover that she could sense songs of other people through their soul. Knowing she was suffering, her parents used their savings to purchase a rare hextech crystal to dampen her magical hearing.

Surprisingly, a consciousness resided in the crystal, which eventually led Seraphine to unleash her full potential as a star singer. Yearning for harmony between Piltover and Zuan, her parents helped her adjust the crystal so that it would instead amplify her gifts.

With unity in mind, Seraphine became “the premier star in both Piltover and Zaun”, an inspiration to all.

Seraphine and her ultimate K/DA ALL OUT skin will be released on patch 10.22.

READ MORE: Ranking the new K/DA All Out skins from bad to the Baddest