Gold, Platinum, Diamond, and Master rank merchandise is available for the first time.

League of Legends developer, Riot, has announced the return of Ranked Merch Unlocks, which give players a way to show off their season nine ranking.

The merch shop will be open until January 21, 2020, and allows players to buy custom clothing pieces that showcase their summoner name and rank.

In past seasons, rank specific merch was only available to players that reached Challenger, but the newest merch drop has gear for players in Gold, Platinum, Diamond, and Master rank.

Each rank has three different options: a women’s short sleeve shirt, a unisex shirt, and a hoodie.

The two shirts each cost US$30 while the hoodie will set you back US$65. 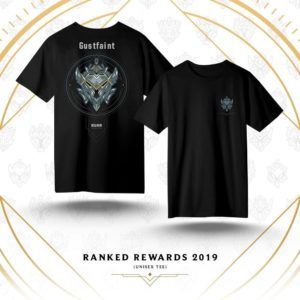 On all three pieces, the front features a small icon of the rank attained, while the back has a much larger ranked icon, as well as the summoner’s name and the season under the crest.

If you weren’t able to get the required summoner’s rank, you will be greeted by the Rift’s saddest champion, Amumu.

You can check out the official Ranked Merch Unlocks here.

READ MORE: Everything you need to know about the League of Legends All-Star Event 2019