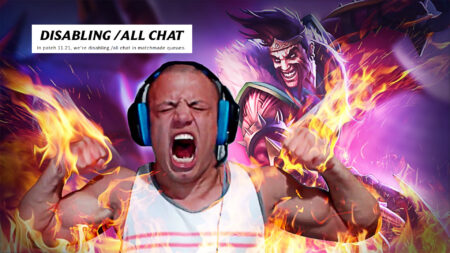 Tyler1 has come out to say that he is not in favor of Riot Games’ decision to remove the LoL All Chat feature during one of his streams.

Banter and communication in League of Legends will never be the same again after the implementation of patch 11.21. Riot Games is planning to disable the All Chat feature in matchmade queues.

Streamer Tyler1 is strongly against the removal of the feature.

“The problem I have with it is, how rated G is this community and this company,” he said on one of his streams. “If you’re ever triggered by toxic chat, you can just mute it and you’ll never see it again.”

The streamer further emphasized that every player has the option to turn the feature off.

Where is the League of Legends All Chat setting located?

To tweak your chat preferences, simply go to settings, then click the interface option under the in-game group. Scroll down and you will see the chat option, which allows you to enable or disable All Chat during matched games.

“It’s 2021, people are going to be toxic,” Tyler1 continued. “People are going to type things you don’t like. We have all the tools to not see that. The All Chat removal is honestly… I don’t think it’s the right step.”

Tyler1 also discussed about the possibility of a League of Legends voice communication.

“No All Chat means this game will never be getting voice chat, ever,” the Twitch streamer continued. “We’ll probably lose team chat privileges. People are infinitely more toxic in team chat than All Chat. If they’re removing All Chat because of ‘toxicity,’ then this is the first step to removing chat in general.”

“Players who won’t or don’t want to use voice chat will immediately become a disadvantage to their team,” Rovient commented on a Reddit thread. “Then, they’ll be flamed and spam pinged for this, further confirming that, yes, they should stay off of voice chat forever.”

Why is Riot Games removing All Chat in League of Legends?

Riot Games is directly addressing the growing verbal abuse issues inside League of Legends, which is why they have decided to disable All Chat in all matchmade queues.

“While All Chat can be the source of fun social interaction between teams, as well as some good-hearted banter, right now negative interactions outweigh the positives,” said Game Director Andrei “Meddler” Van Roon and Lead Gameplay Producer Jeremy “Riot Brightmoon” Lee in a blog post.

“We believe the tradeoff is worth it to cut down on the growing negativity All Chat has been creating in your games.”

The removal of the League of Legends All Chat feature will be implemented in patch 11.21.