Shyvana gets a fearsome dragon design in her new Ruined skin

Shyv is the Elder Dragon! 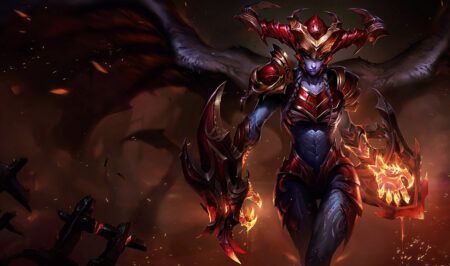 To kick off 2021 and to further hype the start of a new competitive season, League of Legends has released two fresh skin lines, Ruined and Shan Hai Scrolls.

Ruined Shyvana was the star of this skin line, especially since her dragon transformation resembles the Elder Dragon, one of the jungle’s most powerful creatures and every team’s best friend during the late game phase.

The arrival of these sinister-looking skins could only mean two things — either the League of Legends Ruined skin line is a nod to LoL’s upcoming turn-based role-playing game or Riot Games is about to release its first rumored LoL champion for 2021. We can feel it, Ruined King is coming!

Meanwhile, the Shan Hai Scrolls skins were based on the classic literature piece Shan Hai Jing (Classic of Mountains and Seas) which dives into Chinese mythology.

Shan Hai Scrolls Cho’Gath has changed into a majestic beast with scroll designs painted on his body. He might be based on Tiangou, a dog-like creature that eats the sun or moon during an eclipse, as seen from Shan Hai Cho’Gath’s recall animation where he summons tall mountains and then, later on, gobbles the sun in one whole bite.

Shan Hai Scrolls Neeko’s skin lore tells she is a god who tries to convince Shan Hai Jhin to come to the good side. Neeko is radiating in this skin with a bunch of clouds shaped to be her hair and what looks like the moon shining above her. The sound design on Shan Hai Scrolls Neeko is also pretty impressive, playing with stringed instruments and chimes whenever she casts an ability.

The Titan of the Depths, Nautilus, looks absolutely terrifying in his Shan Hai Scrolls skin. Nautilus was a guardian who helped control and seal Jhin.

Lastly, Jhin is portrayed as a mad god in his Shan Hai Scrolls skin, which is very fitting since his lore outed him as a man who believes that murder is an art form. Aside from the huge scroll he summons during his recall animation, Shan Hai Scrolls Jhin turns the champion enemies he has killed into stone which is a pretty cool detail.

All these skins are now available in the League of Legends Public Beta Environment (PBE) for testing.