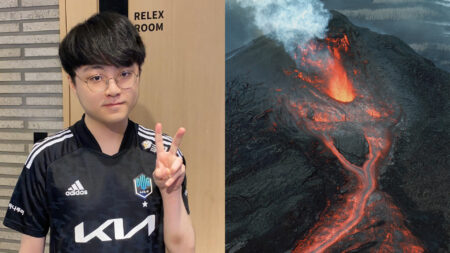 DWG KIA and Gen.G will meet in the grand final of the 2021 LCK Spring season, and will fight to represent the Korean region at the Mid-Season Invitational in May.

“DAMWON has no weakness, but I am most wary of ShowMaker and Canyon,” said Gen.G coach oDin. “However, we have Clid and Bdd ourselves, so I’m not too worried.”

DK coach kkOma echoed the same sentiments about his opponents, stating that Gen.G has carry potential in every lane, and that the bot lane will be an important factor during this final.

When asked about who they want to face in MSI, both coaches were in agreement — an LEC team. oDin even chimed in that he wanted revenge for Worlds 2020, where LEC top gun G2 Esports swept Gen.G in the knockout stage.

As for the players, Gen.G ADC Park “Ruler” Jae-hyuk wanted to test himself in the bot lane, citing strong bot lane teams like Cloud9 and Royal Never Give Up.

For Heo “ShowMaker” Su, he’s looking forward to matchup against former teammate Jang “Nuguri” Ha-gwon and his new team, FunPlus Phoenix. The DK mid laner also shared his thoughts on DWG KIA’s potential trip to MSI, which will be held in Iceland.

“I heard that there were some volcanoes exploding in Iceland; it was kind of scary,” said ShowMaker. “But if I die all the way [there], it will be an honorable death. I’m good.”