Cloud9 await the winner of EG vs FlyQuest in the Grand Final. 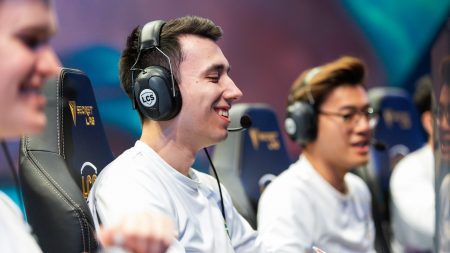 The League of Legends Championship Series has concluded another action-packed weekend with only three teams left standing in the playoffs. Evil Geniuses and FlyQuest are set to face each other in the Lower Bracket Final while Cloud9 wait for the victor in the Grand Final.

Cloud9 faced Evil Geniuses in the quarterfinals and look to be in top form. Although many fans and casters were predicting a complete sweep from C9, Evil Geniuses had the upper hand in game three with Dennis “Svenskeren” Johnsen and Bae “Bang” Jun-sik having exceptional plays.

Despite losing their second game of the year, Cloud9 wrapped up the series with a tankier composition. With Yasin “Nisqy” Dincer playing Rumble and Philippe “Vulcan” Laflamme playing Blitzcrank, C9 was able to crowd-control their way to an Elder Dragon steal, ending the series with a quick game four win.

FlyQuest had an incredible back-and-forth with TSM in the quarterfinals. Aside from Tristan “PowerOfEvil” being a strong matchup to TSM’s veteran mid laner, Søren “Bjergsen” Bjerg, the team also had a top-tier jungle in Lucas “Santorin” Larsen and a pro-active substitute top laner with Colin “Solo” Earnest.

Although things were up in the air until game five, FlyQuest easily dominated Bjergsen and the boys in black with stronger team positioning. As FlyQuest traversed the top jungle of TSM, they happened to pinch out Vincent “Biofrost” Wang for a kill. With the 4v5 advantage, FlyQuest sped through the top-lane tower and inhibitor before finishing the series at 3-2.

The next LCS Spring Playoffs match will be FlyQuest vs. Evil Geniuses on April 19, Sunday 4 a.m. GMT+8.