LCK Week 3 Recap: T1 and Gen.G tie for the lead

The league leaders prove that consistency is the key to dominating the season. 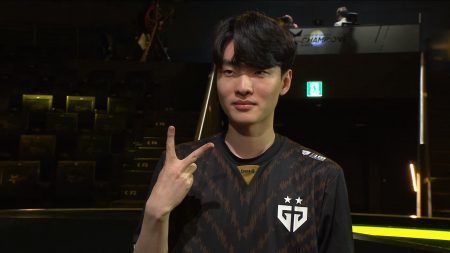 The League of Legends Champions Korea (LCK) has wrapped its third week of competition with the league’s biggest teams charging through the competition.

Match of the Week: Gen.G vs DragonX

Our match of the week saw two of the league’s best teams face off in a thrilling three-game series.

DragonX got the upper hand in game one, but Gen.G immediately retaliated with a dominating game two.

With the scoreboard tied up, Gen.G kept up the momentum, and took an early lead in game three, with an incredible play in the bot lane just three minutes into the game, taking out four of DRX in a quick engage.

DragonX managed to keep the game fairly close, but by the time Gen.G had amassed a 10K gold advantage and filled all their dragon souls, it was all over, as they picked up an ace to finish the series.

SANDBOX Gaming’s OnFleek put on an extraordinary show in the jungle against DAMWON Gaming this week. In the 2-0 upset, OnFleek was the perfect counter to DWG’s crowd control efforts. With his Ragnarok ultimate, OnFleek axed his way through his opponents, ending up with nine kills and nine assists in the final game.

Week 3 ends with ties across the leaderboard. T1 and Gen.G lead the league with a 5-1 standing while Afreeca Freecs tie with DragonX (4-2) for third place.

Hanwha Life Esports and WAMWON Gaming are in fifth place with an even 3-3 standing.

Seventh place goes to both SANDBOX Gaming and Griffin (2-4) while the APK Prince and KT Rolster (1-5) sit at the bottom of the leaderboard.