Hauntzer leads Golden Guardians to a shocking upset over TSM

TSM will now meet Dignitas in the Lower Bracket. 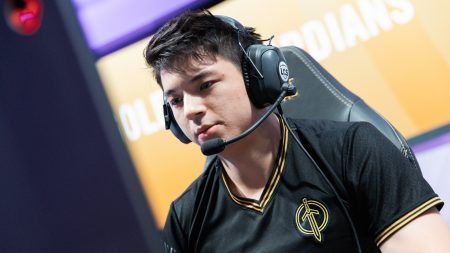 In a shocking turn of events, LCS underdogs Golden Guardians have knocked TSM out of the winner’s bracket on the first day of playoffs.

TSM never got into the series, and played incredibly passive throughout, letting Kevin “Hauntzer” Yarnell and his squad easily took over with more proactive set-ups and clinical clashes.

In Game 1, Hauntzer played a chase-down Mordekaiser that secured the game-changing ace and baron rush. With mid-laner Tanner “Damonte” Damonte using Ziggs, Golden Guardians fast-tracked their demolition of the mid-lane buildings, and lastly the Nexus to claim a game one win.

TSM came in with an aggressive playstyle into the second game, but it would prove to punish them later on with GG’s quickfire tactics. In the final minute, Can “Closer” Çelik’s Sett and Choi “Huhi” Jae-hyun’s Morgana distracted TSM in the mid-lane while the rest of GG initiated a triple-teleport backdoor to burn down the final Nexus turret and Nexus.

GG continued to dominate the series in game three with better team chemistry and thrifty engages. Despite going into a 3v5 clash at the dragon pit, Closer’s Graves pulled off an amazing dash double-kill while Hauntzer’s Mordekaiser secured the Cloud Soul and took another kill on Yiliang “Doublelift” Peng’s Ashe before checking out.

Golden Guardians eventually closed it out with a four-man push in the top lane. With Hauntzer’s Mordekaiser tanking his way through a 2v1 in the river, Closer’s Graves easily shredded through the remaining base defenders for a double kill and completed the well-earned sweep against TSM.

The series win will be Golden Guardians’ first-ever best-of-five win in the LCS. Hauntzer and his crew will move on to the next round, fighting either Team Liquid and Cloud9 while TSM goes down into the Loser’s Bracket, facing off Dignitas on August 16, 4 a.m. (GMT+8).

READ MORE: 2020 LCS Summer Playoffs: Everything you need to know