The Doinb way has always been unconventional. 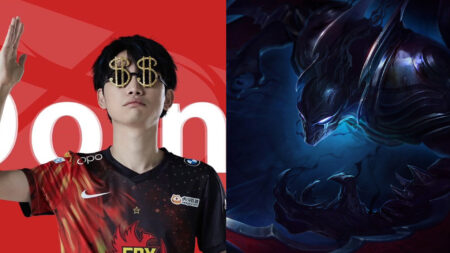 Nocturne is an off meta champion that has only been played seven times in major League of Legends esports leagues this Spring 2021. Out of those seven, two was in the jungle, and one was at top.

Out of the four games Nocturne was used in mid, only one pro player has found success on him — FunPlus Phoenix’s Kim “Doinb” Tae-sang, who has a 100% win rate on this champion.

FunPlus Phoenix surprised when they last picked Nocturne on red side in game two against JD Gaming at the start of LPL Week 7. Laning against Zeng “Yagao” Qi’s Syndra, Doinb was up in CS, and while he did not get any solo kills in the lane, he used vision to find key picks onto enemy champions during rotations.

In team fights, he utilized his ultimate and Stridebreaker and to doubly close the gap with JD Gaming’s backline, ending the 25-minute game with a positive 6/3/9 KDA.

Later that week, Doinb pulled out mid Nocturne again in a crucial game two in their match against Rare Atom (former Vici Gaming). Rare Atom had won game one, so it was on FunPlus Phoenix to win the second game to stay alive in the best-of-three series.

Even though the game didn’t go as smoothly, Doinb’s Nocturne and support Liu “Crisp” Qing-Song’s Galio combo worked wonders in team fights. To maximize Hero’s Entrance, Galio players prefer pairing it with champions who have entry abilities, such as Camille, Rengar, and in this case, Nocturne.

The moment Paranoia is cast and Nocturne flies in, Crip’s Galio follows up with his own ultimate to knock up champions caught within the radius. Combined with Irelia’s Vanguard’s Edge, that’s even more layered crowd control. Unable to deal with FunPlus Phoenix’s team fighting prowess, FPX reverse swept Rare Atom 2-1, which gave Doinb his second win on mid Nocturne this season.

An unconventional mid laner with a unique champion pool, Doinb is able to make Nocturne mid work due to his individual playstyle and the way he chooses to play around his teammates. A natural roamer, he works heavily with his jungler and support to set up vision, find picks, and snowball side lanes.

Which off-meta champion will Doinb pull out next?