Let’s steal a floating city, shall we? 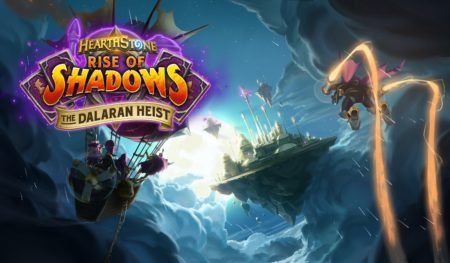 Hearthstone’s latest solo adventure, Rise of Shadows: The Dalaran Heist, will launch on May 16 and looks set to be one of the best yet.

The Heist will play out over five chapters and follows the League of E.V.I.L. as they try to plunder the riches of Dalaran, culminating in their ultimate goal to steal the floating city itself.

Each chapter will be set in a different location, with a unique “Twist” on the rules and a unique final boss. A new loadout system will allow players to customize their playstyle through selectable hero powers and unlockable alternate starting decks, while tavern breaks in between games will let players make tweaks to their deck.

Once all five chapters have been completed, a new “Anomaly Mode” will be unlocked, which will allow players to replay any chapter in the adventure with randomized rules, like “Wild Magic”, which duplicates every spell cast on a new random target.

The five chapters are as follows:

Rise of Shadows: The Dalaran Heist releases on May 16. The first chapter, Dalaran Bank, will be available for free, while subsequent chapters can be purchased for 700 gold each or US$6.99. Alternatively, you can purchase the entire adventure for US$19.99.