Review: Hearthstone’s Dalaran Heist is super agonizing at times, but so much fun

I have a love-hate relationship with this Solo Adventure. 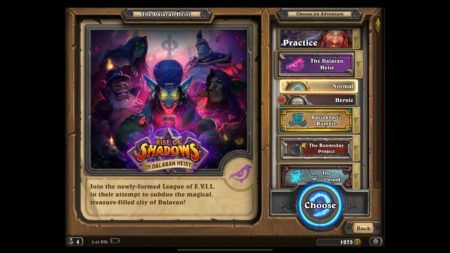 There were plenty of times I wanted to just put the Apple iPad aside (none too gently, I might add) while trying to finish up Hearthstone’s latest Solo Adventure, The Dalaran Heist.

As a veteran gamer who has some card games under my belt, I had the impression that the game would be a breeze, but that was not the case, as I got my butt kicked multiple times.

In fact, The Dalaran Heist was at times frustrating and difficult, thanks to the crazy RNG elements that could suddenly derail your run. When it all comes together though, with the right cards letting you play ludicrous combos to beat your computer opponent, well, that’s what really makes the Solo Adventure worth the US$19.99 you will spend to unlock all the chapters. You can also spend US$6.99 or in-game currency (700 coins) per chapter as well.

Taking place in World of Warcraft’s mystical floating city of Dalaran, the adventure features the League of E.V.I.L. plotting to steal the entire city, and has you choosing from nine different anti-heroes (including the adorable Eudora) to play.

You’ll start off by robbing a bank and freeing prisoners to cause chaos, then taking to the streets of Dalaran before taking cover in the sewers, until you finally chase out the Kirin Tor, the mage rulers of the city.

Every chapter features a unique twist, such as having a limited amount of space to deploy minions, or swapping the health and attack of minions around. After picking an anti-hero, you’ll then have to go through 8 bosses (12 for the last chapter), while the game will also let you add cards to your deck and let you choose passives. A mid-game break in the form of a Tavern visit lets you enhance, add or remove them from your deck.

Picking the right cards between rounds can make or break a game, and turning on the anomaly mode at the start, which adds an additional effect to your matches, adds another level of strategy to consider.

I once turned on the anomaly that let me start with two more mana crystals and two additional cards, which let me move along smoothly, smashing my opponents with ease, until I hit a brick wall with a mage that had a zero cost skill that gave them an arcane spell every turn.

The additional resources allowed my computer opponent to immediately deploy plenty of spell damage minions, and then spam spells to completely destroy my creatures and finally, me.

It’s probably a better idea to turn off the anomaly effect for easier runs, but they can be tons of fun. Besides anomaly mode, picking the right passive cards when they are offered after you beat the first two bosses can also help you triumph, but if not, there’s always conceding and trying again if you don’t think you’re going to be successful.

Once you’re done, you can retry the adventure with different villains, with each one featuring different powers to unlock, as well as different decks. There’s also a Heroic mode I’m planning to tackle after this review, which will probably end up with me screaming out my frustration about the general unfairness of everything.

Verdict: Get this Solo Adventure!

READ ALSO: Hearthstone’s Rise of the Mech event will give you a free Legendary gold card