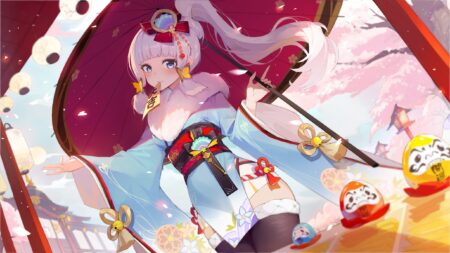 Data showed the five-star Cryo character on top of the charts for Spiral Abyss 2.0.

Step aside, Ganyu — there’s a new Cryo queen in the Abyss!

Statistics presented Inazuma’s Ayaka is now an S-tier character in the Spiral Abyss. She drastically rose up the rankings as the game’s top DPS character in the special domain, according to community website Genshin AppSample.

The rankings’ top four show a mix of support (Zhongli, Venti, Bennett) and sub-DPS (Kazuha) characters, with the DPS Ayaka coming in fifth.

She has dethroned Liyue’s hardworking secretary Ganyu as the Spiral Abyss’ best DPS. Support Diona is just behind as the third-best Cryo user in the game.

You can check out the full Spiral Abyss rankings here.

The best farming guide to Ayaka materials in Genshin Impact

These rankings just prove that this Cryo-sword user is worth ascending.

Players will be needing a lot of materials like Sakura Bloom, Handguards, and Shivada Jade.

Read our Ayaka farming guide for more details on how to ascend and level up Inazuma’s Frostflake Heron.

READ MORE: This Genshin Impact banner broke the record for sales in China