Who is Ikumi Nakamura and why does everyone suddenly love her?

Step aside Keanu, E3 has a new star. 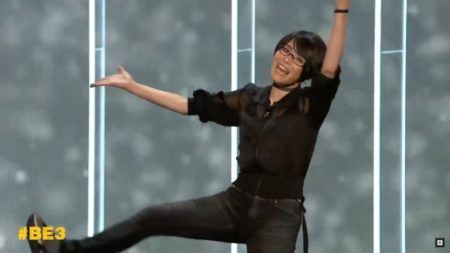 The internet has fallen in love with Ikumi Nakamura, the adorable Creative Director for Ghostwire: Tokyo, one of Tango Gameworks upcoming video games that will be published by Bethesda.

Nakamura was a breath of fresh air at E3, with her earnest and enthusiast presentation. When she bounced onto the stage at Bethesda’s press conference to introduce her game, Nakamura expressed her amazement at the E3 crowd, and even openly told everyone about her stage fright. This did not stop her from delivering an awesome introduction for Ghostwire: Tokyo, where she made cute gestures, cracked some jokes, and spoke a bit of Japanese.

Her bubbliness and sincerity have made her an instant internet sensation, leading to a ton of fan art already being made in her honor:

Nakamura started out her career at Dimps Corporation, a Japanese video game company known for developing the Dragon Ball Z: Budokai trilogy for the PlayStation 2.

She later worked as a concept artist for Capcom on Okami and for Sega on Bayonetta. In 2010 she joined Tango Gameworks, the studio founded by her mentor, Shinji Mikami, creator of the Resident Evil series, after he left Capcom.

At Tango, Nakamura worked as the lead artist on its survival-horror games, The Evil Within, and The Evil Within 2, contributing many of the games’ characters and environments. When asked how she prepared for her monster designs for The Evil Within, Nakamura answered, “I’m always ready to dive into the grotesque.”

In her presentation, Nakamura described the game as “spooky,” but not in the survival horror genre like The Evil Within. You’ll play as the mysterious archer seen in the trailer, and will be tasked with exploring Toyko and uncovering the mystery of why people are disappearing.

No release date or platforms for Ghostwire: Tokyo have been announced yet.