The next-gen console can also play your old Xbox, Xbox 360, and Xbox One games from an external hard drive. 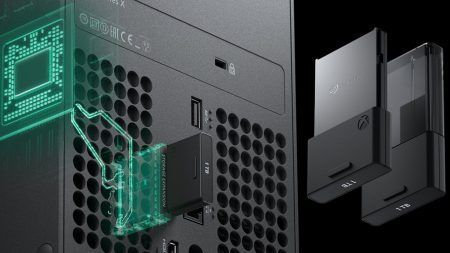 Microsoft has revealed a new Storage Expansion Card for the Xbox Series X. The company has teamed up with Seagate to launch the 1TB expansion cards for its next-generation console.

The expansion cards simply slot into the back of the console, giving users a handy storage alternative in case they use up the built-in 1TB NVMe SSD.

The console also uses PCI Express 4.0 connection for both the external NVMe SSD and external SSDs, which is ideal for the upcoming next-gen games.

The Xbox Series X still work with existing USB 3.1 external hard drives which can allow players to run their Xbox One, Xbox 360, and Xbox games directly from the external HDD.

Xbox Series X games, however, can only run from the internal SSD or the Expandable Storage Drive.

Microsoft has yet to announce how much the new Storage Expansion Cards will cost, or whether third-party hard drives will work on the Xbox Series X. For now, Seagate is the only storage manufacturer that has partnered with Microsoft for their next-gen console.

READ MORE: Everything you need to know about the Microsoft Xbox Series X