This one’s for all the dads out there! 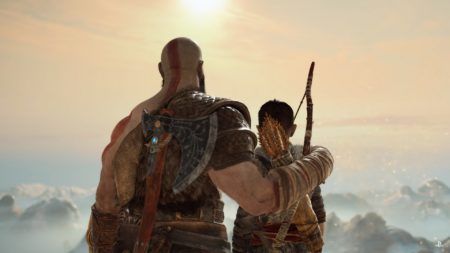 Everyone knows mom knows best, but dads play an important part as well. We already picked out the best video game moms who have gone above and beyond, but our video game dads are also equally awesome. Here are our picks, from demigods, superhumans and err, ghostly kings.

Joel (The Last of Us)

This old timer is one of the protagonists of Naughty Dog’s The Last of Us. After losing his daughter Sarah in the zombie outbreak, Joel becomes a father figure to Ellie, a 14-year-old girl who may hold the cure to the zombie plague.

After Sarah’s death, Joel becomes more defensive, killing zombies (and people) when necessary to protect his loved ones. He cares greatly for Ellie, even sacrificing the whole of humanity just to keep her safe.

That familiar “BOY!” yell comes from none other than Kratos, the god of war. While Kratos in his younger days would never have won father of the year (he did after all murder his entire family after being tricked by Ares), the older, wiser Kratos we see in the 2018 game is a completely different person.

Kratos raises his son Atreus to not make the same mistakes he did, teaching him to accept and learn from his past.

“I have been teaching you to survive! We are gods, boy, and that makes us a target. From now until the end of days, you are marked. So I teach you to kill, yes. But in defense of yourself, never as an indulgence.”

This vigilante is not only a superhuman, but a super dad as well. He saves his daughter from a plot to overthrow her as the rightful heir to the throne of Dunwall, but he also sets a good example for her along the way.

With his supernatural powers and abilities, Corvo could easily slaughter everyone in Dunwall city if he wanted to, but indulging in chaos results in his daughter, Emily, either dying at the end of the game, or following Corvo’s example and becoming a cruel, tyrannical queen.

But if players show mercy and restraint throughout the game, killing only when necessary, Emily will follow her dad’s example, growing up to be a wise and merciful queen.

King Rhoam (The Legend of Zelda: Breath of the Wild)

Rhoam Bosphoramus Hyrule not only serves as the father to Princess Zelda, but a father to the whole Hyrule kingdom as well.

Even in his spirit form, King Rhoam continues to help his daughter in the quest to defeat Calamity Gannon, guiding Link as he ventures out after his deep sleep.

Before disappearing at the start of The Legend of Zelda: Breath of the Wild, Rhoam prepares Link to face all kinds of dangers for his beloved Zelda and for all of Hyrule.

Weapons designer Torbjörn Lindholm is the father to Brigitte, Overwatch‘s mechanical engineer. Torb supports his daughter more than anyone else, even in her decision to join her companion Reinhardt in Overwatch.

This workaholic Swedish dad is always ready to protect everyone, making him the sole pops of Overwatch.