Like Microsoft’s Xbox, the upcoming Sony console will use AMD hardware. 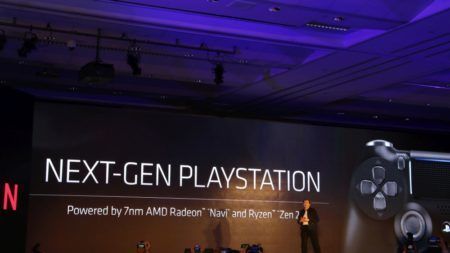 AMD has scored a big win for its upcoming processor and graphic chips.

Sony’s next-gen console, the PlayStation 5 (PS5), will only use AMD’s 7nm Radeon “Navi” GPU and Ryzen “Zen 2” processor inside, the chip-maker announced at its keynote event at Computex 2019.

Unlike the PlayStation 4, the PS5 won’t be using a semi-custom processor and graphics solution. In fact, even with Sony adding its own optimizations, the hardware will be very similar to what AMD will offer in the market. It’s also interesting to note that Microsoft’s Xbox One X also uses AMD systems as well.

While the next-gen AMD Ryzen processor has been making headlines of late, everything about AMD’s Navi is new. The upcoming graphics will run on next-gen micro-architecture, called Radeon DNA (RDNA). This upgrade promises a more streamlined graphics pipeline that ensures higher Performance-per-Clock delivery, while keeping power demands at an all-time low. All in all, AMD wants to revolutionize the games console space for the next decade with its next-gen hardware.

AMD did not share specifics on what type of AMD Radeon “Navi” and Ryzen “Zen 2” specs will be on the PS5. However, what is certain is how the next-gen console will have ray-tracing and backwards compatibility support. Of course, more details will be forthcoming during the AMD E3 2019 livestream that airs on June 11 (6 a.m. GMT+8).

READ ALSO: The PS5 may have ‘cross-gen’ play