The Warriors of the Sky will appear in the game soon to battle evil in the far future. 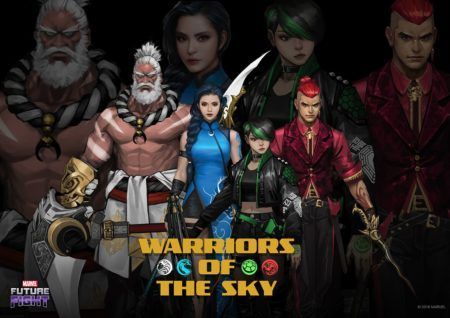 The new Warriors of the Sky team consists of four heroes from Asia — Taiwan, Thailand, Malaysia, and Vietnam, each with their own powers based on the mythical cardinal guardians.

War Tiger from Thailand, is the guardian of the west, while Blue Dragon from Vietnam defends the east. Then you have Sun Bird, a Malaysian pirate who guards the south. Lastly, you have Shadow Shell, the north guardian from Taiwan (who’s based on the dragon turtle guardian).

As for how these heroes came about, Marvel Games senior producer Danny Koo said the idea for the heroes came from his love of food in these countries.

“I so happen to like food from these four places and it provided us a starting point. I looked at local culture and patterns that we can associate, and it then informs the design of the characters,” said Koo.

“We needed to create a team and look distinctly unique and where they originate from and this is the result.”

These new heroes join fellow Marvel original game heroes Luna Snow and Crescent & Io in Future Fight, and will be released soon. Marvel Games did not disclose when they will be released, nor whether the heroes would be free or premium characters.

Those keen on learning the backstories of these new characters can also wait for a possible one-shot comic that may be released in the future, said Marvel Games.