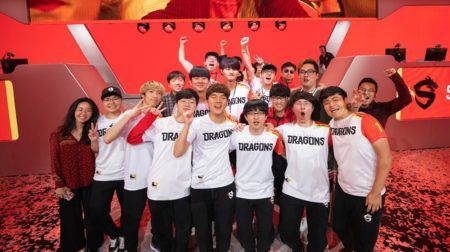 The Shanghai Dragons are your Overwatch League Stage 3 Champions

After going 0-40 in their inaugural season, the Shanghai Dragons have completed the greatest turnaround in esports, beating the top three teams in the league to become Overwatch League Stage 3 champions.

The Dragons trounced the second-ranked NYXL 3-1 in the quarterfinals, stunned the top-ranked Vancouver Titans 4-1 in the semifinals, and took a nailbiting 4-3 win over the third-ranked San Francisco Shock in the finals.

Shanghai’s Yang “DDing” Jinhyeok carried his team with his brilliant Pharah play, and was backed up by the incredible support duo of Yang “Luffy” Seonghyeon and Son “CoMa” Kyungwoo.

In a thrilling seven-game series played in Da Nang, Vietnam, the hometown team rode a wave of crowd support to victory, besting Chinese Taipei 4-3 in the Arena of Valor 2019 World Cup final.

The final was decided in the Jungle, with both teams relying on their star junglers to carry them to victory. On Vietnam’s side Trần “ADC” Đức Chiến was the difference-maker in many of Vietnam’s wins, while Chinese Taipei’s Chang “Neil” Chun-Sheng was a monster all tournament.

The finals went back and forth, with Vietnam winning one game, and Chinese Taipei immediately tying it up by taking the next. But with the score tied 3-3, Vietnam closed out the series with a dominant performance from ADC and Trần “XB” Xuân Bách, who finished off the Taipei team with a huge Maloch ultimate in their Dark Slayer Lane.

Chaos Esports Club, Forward Gaming, and Royal Never Give Up clinch the last spots for TI9

We now know all 18 teams who will be competing at the International 9.