After a difficult start to the Minor, Nigma fight through adversity against GeekFam and make their way to the Grand Final against RNG. 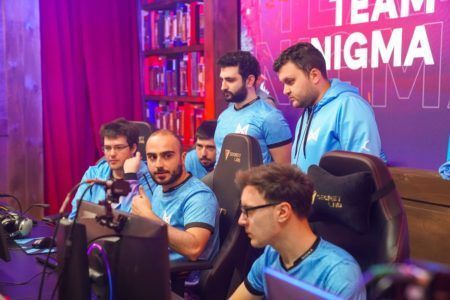 The final day of the WePlay! Bukovel Minor kicked off with the Lower Bracket Final match between Nigma Esports and GeekFam.

Nigma was able to stave off elimination after defeating Gambit Esports 2-1 in their Lower Bracket Semifinal, while GeekFam looked to regroup after their 2-1 loss to Royal Never Give Up during the Upper Bracket Finals.

After two exciting games, it was Nigma who would get their rematch against RNG in the Grand Final, defeating GeekFam 2-0.

Nigma opened up with a Phantom Lancer pick on Amer “Miracle-” Al-Barkawi and Necrophos for Ivan “Mind Control” Ivanov.

Nigma had a strong laning stage, but GeekFam started taking control of the game once they were able to rotate their full five-man squad around the map.

Raven’s Slark was dominant early on, taking down Mind Control’s Necrophos at the top lane. Nigma also found themselves overextending with slept ultimates that led to easy kills for GeekFam.

GeekFam was able to take another convincing team fight thanks to their Aegis of the Immortal advantage on Raven. With most of Nigma’s spells spent yet again, Kenny “Xepher” Deo’s Rubick was able to Spell Steal the Reaper’s Scythe ultimate and eliminate w33 from the fight.

Nigma pursued their fleeing opponents and forced a team fight that ended up shifting the entire course of the match.

With Nigma’s late-game strategy in full effect, their multiple team items and auras were too much for GeekFam to handle and they were able to force the Malaysian squad to tap out.

For the following game, GeekFam decided to go with a Lina on the mid lane, Doom Bringer offlane, and Lifestealer hard carry. They finished their draft with a Rubick support to go with their first picked Keeper of the Light.

Nigma drafted Ember Spirit for Miracle-, a hero he hasn’t lost with throughout the tournament. They then picked an Earthshaker for Maroun “GH” Merhej and went with w33’s Wind Ranger yet again.

GeekFam continued to have a strong laning phase with the team making sure Raven’s Lifestealer was able to farm with little opposition.

Miracle- made use of Ember Spirit’s initiation capabilities by picking off GeekFam’s isolated support heroes. A few moments later, both teams met at the top lane where Mind Control’s Abaddon baited in the entire GeekFam to commit to a team fight. This set up the most impactful play of the game, as GH hit an Echo Slam that caught four Radiant heroes.

Nigma extended their lead by continuing to pressure GeekFam and preventing them from moving around the map freely.

Miracle-‘s Ember Spirit continued to dive into GeekFam’s backlines and prevented their support heroes from making key plays during clashes.

GeekFam managed to fight back in their jungle after Raven was able to take out w33’s Wind Ranger.

Later on, a middle lane fight broke out that looked good for Nigma, but it was Raven’s Lifestealer who managed to do the most damage despite his lack of teammates.

However, GeekFam’s late-game heroics were not enough to get them back in the game.

Nigma continued taking down objectives and eventually claimed the Mega Creep advantage. GeekFam made their opponents work hard for the win, but Nigma just focused down the Radiant Ancient instead of eliminating their enemy’s heroes to win game two.

Nigma moves on to face Royal Never Give Up in the Grand Final of the WePlay! Bukovel Minor, which is a best-of-five match to see who will advance to the DreamLeague Season 13 Leipzig Major.

GeekFam exceeded everyone’s expectations by finishing in third place, taking home US$54,000 and 110 DPC points for their efforts.